A March for the Exits 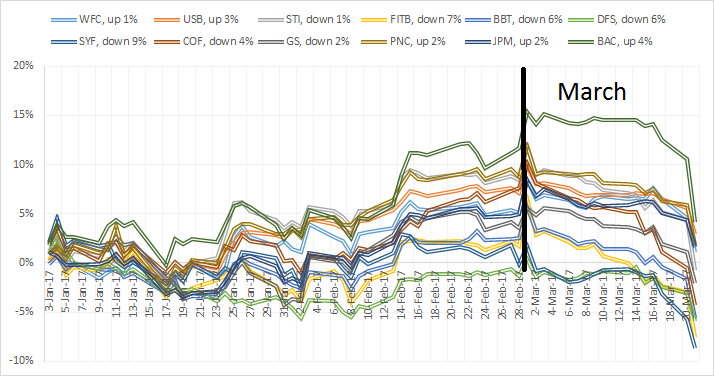 The fortune of holders who own bank stocks has deviated substantially since the beginning of March when holders began their "March" for the exits.

SYF, the former GE subsidiary, and DFS were the only stocks not up at the beginning of March and it seems that what many thought could be controlled has spread to wider swath of banking investments. Some investors have implied that we have a full blown infection as they have seen stocks such as STI decline nearly 9%.

Many of the banking stocks do not necessarily appear cheap relative to their last year's EPS. Especially that of PNC which at $131 trading at nearly 18 times 2016 earnings. USB currently trades at 16 times and BAC at 15 times. However some stocks appear to have been passed over by the market. Capital One Financial trades at 12 times earnings and their earnings were depressed last year due to the company choosing growth over profitability, a concept which was discussed in an earlier article.

While some of the moves lower may have been needed, violent shifts in movement often can create opportunities for the patient investor.

A Shadow of its Former Self - First Solar