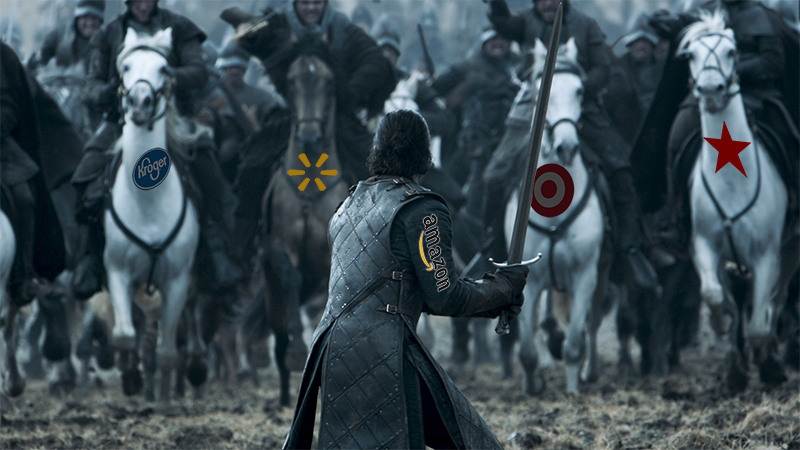 The market has been growing worrisome about Amazon and their horrendous stock chart which spells out pain for the technical analysts. With ramping competition from every retailer imaginable moving into the online business and Wal-Mart using its deep pockets to bolster its e-commerce presence, Amazon is simply a sitting duck about to be trampled by the entire retail industry coming right at it.

The battle is a little one-sided of course, given that many of the retailers who need to battle Amazon are using its web services - so much so that Wal-Mart needs to publicly tell its customers to stop using AWS, to aid in its own struggle against Amazon. Wal-Mart invested $3B last year to buy Jet.com in order to try and boost its online initiative. As a matter of fact, many retailers are pushing hard to get onto the web in a meaningful way. But let's not forget that Wal-Mart - the massive king of retail stores, and still one of the largest revenue generators in the world, is only half the size of Amazon by market cap.

Amazon remains focused on its core mission of continuing to increase its product selection and to provide the best customer service and experience - with super fast delivery being a key area of growth. CEO Jeff Bezos even had some key advice for competitors back when book outlet, Barnes and Noble, was feeling the pressure from Amazon.

Bezos advised competitors to focus on what they do well - in this case, their physical stores. He advised them not to move to the web, and to focus on their core businesses. While it is difficult to trust this type of advice coming from a competitor, many businesses today seem to have focused less on their core businesses in a struggle to attain a presence on the web. This leaves an opening for Bezos - while everyone is preparing to attack his robust online business, Bezos purchased Whole Foods, and is preparing to attack the brick and mortar businesses, which are cash cows for many retailers and are funding their foray onto the web. The physical locations are already under pressure from the web counterparts, but adding to this pressure from Whole Foods, which no longer cares about slashing prices (leading to large declines in Kroger and Wal-Mart yesterday) but will allow Bezos to learn more and to integrate the physical stores with his online business. Amazon already has the dominant Amazon Prime service at its back, which can be used to integrate with new Whole Foods services.

Whole Foods is synonymous with a healthy and luxurious grocery shopping experience, but used to come at a hefty price at the checkout line. With prices being slashed now that it's under Amazon ownership, the grocery stores which really has no competition up until now, are going to face the largest threat they have every encountered. There is very little loyalty at a grocery store and they sell commodity products meaning that consumers will simply go to whoever has the lowest price and the best quality. Amazon will offer a loyalty type program with Amazon Prime, will cut prices, and could use its new locations as food warehouses for quick grocery delivery services. This could drain the retailer competitors of their cash cow funding that have them all focused on bringing their businesses to the web in a big way.

As a final note, it has been years since the retailers have known about Amazon, but they continue to defend their businesses as being Amazon-proof instead of innovating. That said, Google has partnered with Wal-Mart, and may be one of the few companies out there that have the ability to take on Amazon by helping the retailers and grocers with its innovative products and services.

A Small Spark Could Lead to a Greater Vision