Aspen insurance (AHL) & Axis Capital (AXS), two Bermuda based insurance companies, reported results after the close on Wednesday. Both companies reported combined ratios that were higher than many of its peers. Aspen reported a combined ratio of exactly 100% while Axis had a combined ratio of 97.6% for the second quarter. The combined ratio is a closely watched metric in the insurance industry because it measures a company's underwriting results and is calculated by taking insurance losses plus general & administrative costs divided by net premiums earned. A ratio under 1 means that an insurer writes profitability. The chart below shows how Aspen & Axis compared to the industry since 2010. 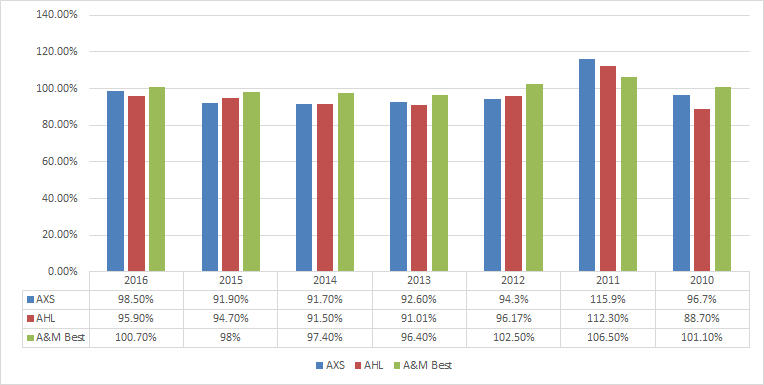 AM Best, a U.S. based rating agency, said that the ratio deteriorated to 100.7% in 2016, but it expects an improvement to 100.3% in 2017. Aspen and Axis have, also, seen their expense ratios increase almost every year since 2003; this could be crimping overall profitability.

Axis had said in its conference call in the second quarter of 2014 that it expected its G&A ratio to drop under 14% in 2016, but the ratio for the first 6 months of 2017 was 16.2% compared to 16% in 2016. Also, acquisition costs for Axis rose to 20.5% from 20%. Acquisition costs represent the costs that an insurer pays to originate or buy a policy: these costs can includes commissions to sales agents and other acquisition expenses. Aspen's G&A ratio was 21.1% for the first 6 months.

Do you like this article? Up vote it or your favorite article to the front page: https://themarketisopen.com/posts/axis-and-aspen-report-results

Aspen reported a return of operating equity of 4% this quarter and 5.4% in Q1 compared to AXS of 8.6% this quarter and 4% in Q1. Each company's return on equity is precariously close to their cost of capital. Axis issued 5.5% preferred shares near the end of 2016. An equity discount rate should be a little higher than the preferred rate as it has slightly more risk.