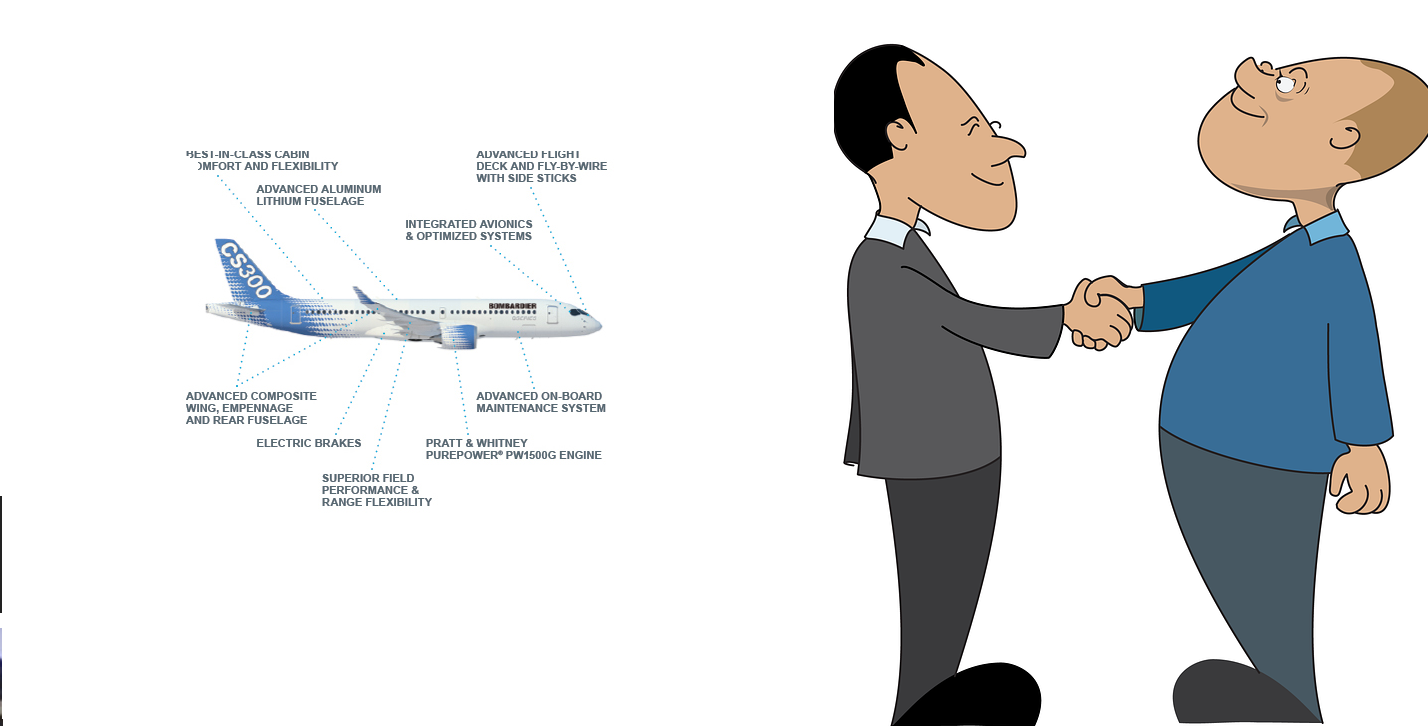 According to AirBus's CEO, Tom Enders, "this is a win-win for everybody! The C Series, with its state-of-the-art design and great economics, is a great fit with our existing single-aisle aircraft family and rapidly extends our product offering." Bombardier emphatically stated in its press release all parties are not contributing cash into the closing. However, Bombardier will continue with its current funding plan of the C Series and if there are cash shortfalls, Bombardier must contribute: US$350 million during the first year, and up to a maximum of $350 million combined amount over both years. In consideration for this Bombardier will receive non-voting participating shares of CSALP (C series Spinoff company) with cumulative annual dividends of 2%.

The deal also features call rights and put rights. Airbus can purchase the other 49.99% at the invested amount plus accrued dividends, but these call rights cannot be exercised for at least 7.5 years. On the other hand, Bombardier will benefit from a corresponding put right whereby it could require that Airbus acquire its interest at fair market value after the expiry of the same period.

While the deal provides Bombarder with a lifeline for an aircraft that outside observers compliment for its efficiency, the fine print of the deal, as discussed above, raises the possibility that Airbus may acquire the entire C series. Furthermore, Analysts have noted that Airbus will pay nothing for an entity valued at $4 billion. Also, if Airbus is truly able to add synergies the program would add much more value, making Airbus's deal even better.

Observers of the deal have painted Boeing the arch nemesis while Airbus is the supposed friend, but its easy to be a friend when you get half someones house for being the property manager. Despite this seemingly negative deal, Bombardier stock soared over 20% on Tuesday. However, Bombardier shareholders are a clear loser in the deal; the government of Canada and Quebec are likely another loser as they had invested over $1.3B previously in the C Series, and now face the prospect that C Series jobs move to Airbus's production plant in Alabama; perhaps the government is now realizing that it should not have involved itself in the private sector to begin with.

At Last, the Atlassian Quarter We've Been Waiting For