Calling a Top in a Tech Company’s Stock 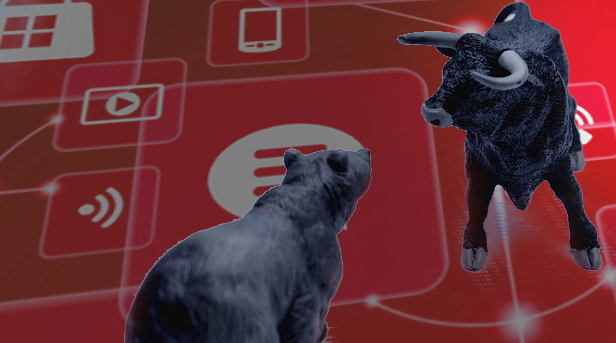 Technology companies are usually the heated and most exciting companies that trade on the market. Due to their huge growth potential of disrupting entire industries, or scaling quickly without much additional cost, there’s a reason these companies get ridiculous valuations at early stages and then grow into them over time. However road bumps tend to occur that causes these stocks to fall especially when trading at high PE ratios, and investors are always looking for the top to dump the stock. But if they abandon ship too early, there’s a lot of potential upside that could be lost. So how does one know when to call a top, especially with a tech stock that doesn’t have a ridiculous PE ratio or valuation?

First, let’s examine Apple. The company has had explosive growth and is, by quite a margin, the largest company in the world. Not long ago, investors thought that Apple had run out of innovative ideas and the firm took a beating. Tim Cook has always had a handle on the company, and after Apple's last quarterly report the stock has jumped to new nosebleed highs. How high can Apple go? Or has Apple reached a top? Apple’s earnings are quite stable, and its PE ratio should be reasonable and above the market. After all, Apple is better than the average stock. Is it a better and more innovative company than Microsoft? Perhaps it should trade with a higher PE than Microsoft. But most importantly, we look at where stocks are going. Are there catalysts to drive it higher in the future? Apple has the Apple Watch in its early innings. Apple Pay is also in its infancy and has yet to spread globally. These are needle movers with immense potential. Taking a piece of the pie from everyone’s transaction is a massive business. Plus the Apple ecosystem will amplify the gains. HealthKit is another product that is in its own industry. Apple could potentially grab a huge market share in the space. Thus the stock likely hasn’t panned out yet since it has a reasonable valuation that doesn’t factor in its potential for future growth in the near term. In the outer years, iTV could be in the works which could act as another catalyst for the stock. Apple's PE ratio has certainly expanded from 14x to the high 18x multiples, yet other large companies such as Microsoft trade with PEs of 28x earnings albeit similar growth rates.

The long terms trends help to determine of companies still have growth ahead of themselves or if they have peaked.

Based on the Apple analysis, we may look at another tech firm, Skyworks Solutions which has its hands in pretty much every mobile device. If the market for wearables, a brand new industry that barely existed years ago, has potential to grow with the help of Apple, then this will act as a catalyst. Thus Skyworks isn’t done growing. The mobile market is growing rapidly on its own, and as Skyworks secures new businesses in this growing market, it will grow much faster than the market. Another catalyst is drones. Or more powerful routers. What about virtual reality. All of these new devices that use Skyworks technology will act as catalysts for future growth beyond what investors saw in the year 2000. This time around, tech firms including Skyworks have strong balance sheets, and earnings to back up their valuations.

Both Apple and Skyworks are in the midst of growing markets and long term trends. Although they have both run up, it is still too early to call any sort of top in the stocks, as consumers still want more out of their devices. This trend isn't backing down and has made up for much of the gains in these stocks in the past. Should they continue, sellers may miss out on even more of the same types of gains.

Belmond Reported Results After the Bell