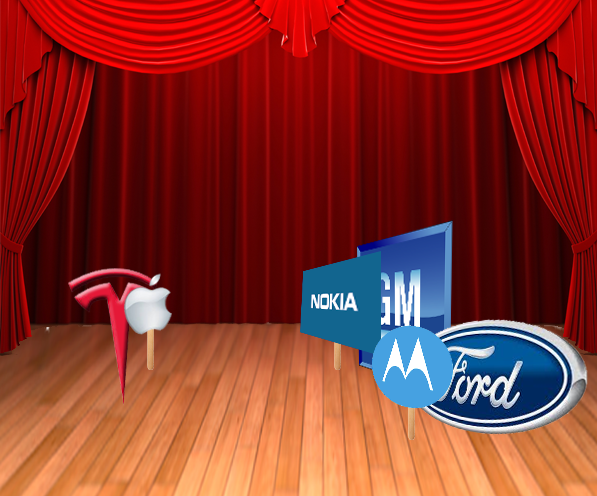 Tesla recently surpassed Ford in size by market cap, causing a frenzy of bears and naysayers to come out and question the validity of this statement, citing that Tesla is drastically overvalued. How can a car company which sold 77,000 cars and lost $700M last year be worth more than a company that sold 6.7M automobiles and made $4.5B? After all, Ford employers over 150 thousand people, has factories all over the world, and sells cars into a strong network of dealerships that greatly expand its global reach.

Tesla Investors are Buying into a Dream

Bryce Hoffman from Forbes argues that investors in Tesla are buying into a dream, whereas Ford shareholders are buying into real sales and profits. Perhaps this is correct. Tesla shares are clearly overvalued on almost every metric when compared to Ford. But perhaps there is more to the Tesla story than just the current numbers and sales figures. Smart investors tend to look years into the future and make educated guesses as to what they believe the world will be like. While the market cap of Tesla is currently out of line, the stock market could keep this irrationality going for quite some time.

There are also two current "metrics" that bode well for Tesla, among all of the bearish ones. The first is growth. Investors prioritize growth higher than anything else, as growth leads to higher prices in the future. Ford is fairly stagnant, while Tesla is growing revenue at high double digits. The fact that the company made $7B in 2016, validates its business to investors, and should make you start to worry about other car companies. Tesla plans to sell 1 million cars by 2020, and if it can achieve this optimistic goal, it may actually be earning close to what Ford is making in just a few years time. Therefore the company can quickly grow into its market cap, even if it's in the nose-bleed section at the present time.

Tesla also has some pretty passionate fans who believe that the company will serve as more than just a car company and will transition the world to a cleaner mode of transportation. If it wasn't for Tesla, Ford, GM, and the other major car companies would not be investing so heavily in electric cars. They would still be pumping out gas guzzling cars, as they are currently doing. Tesla is on a mission bigger than sales and profit, and investor as well as consumers respect that; and this could lead to some very loyal customers in the future.

Is Tesla Similar to Apple?

There is no other Apple in the world and there never will be. But there are potentially some similarities between Apple and Tesla, which could be what (very) forward-looking investors are thinking of when they buy the stock.

In 2007 when Apple introduced the iPhone, they only sold 1.7M devices. In the meantime, Nokia was selling upwards of 460M phones per year and Motorola over 100M phones. These companies were the dominant incumbents that no one thought would ever fail. However the relatively small company that Apple was, delivered a product that fans loved, and the community quickly grew over the years. All along the way you may have heard the headlines including "iPhone Killer", "weak iPhone sales", "tons of competition" etc. But 10 years later, Apple is the world's most valuable company and get the bulk of its profits from the iPhone which makes more money than the rest of the industry combined. Even now there is still plenty of competition, but Nokia and Motorola have been reduced to peanuts compared to the Apple giant.

This was a very unique growth story, and will likely never be replicated in the same way. However there are some similarities that Tesla shares with Apple, which may make Tesla's market cap actually seem low when thinking 5 to 10 years ahead.

Apple's greatest weakness,which turned out to be its greatest strength was its vertically integrated business model. It controlled everything from the design manufacture of the device (which Foxconn does, but Apple monitors very closely) all the way to how the device is presented to the customer in store. Tesla seems to follow the same model. Perhaps Tesla is even more vertically integrated, as it will control its own factories that build the vehicles. Tesla also designs the cars itself, and operates its own galleries. Tesla currently also handles the maintenance of its own vehicles. Companies such as Ford and GM take a more "modular approach", especially at the consumer end. Their vehicles are sold solely through dealerships, which may make the customer experience vastly different at different locations. Currently the maintenance is done at various locations, and customers generally dread the idea of taking their car in for maintenance.

Tesla is better positioned, lacking all of the legacy business and bureaucracy that hold GM, Ford, and all the other car companies back. They have taken many customer pains out of car ownership and are delighting customers with features that have never been seen before in a car. For example, Tesla's electric vehicles don't require oil changes. There's no need to go to the gas station. Maintenance on everything except the tires and brakes is pretty much optional. Tesla also has a growing supercharger and charging network. The company is building a massive gigafactory to build its own batteries for mass production. Sure some other car companies have some of these features, or they can dump billions of dollars into copying Tesla. But Tesla is more of a technology company than a car company. By the time they are copied, they would have moved onto the next thing. In that sense, they are similar to Apple as well.

If Tesla takes just a small fraction of the big car companies' business, the entire bulky network could begin to fall like it did in 2008. Tesla is nimble while these big car companies are slow and lack engineering talent. There is also a certain urgency in Silicon Valley and in Tesla which allows them to work faster and could allow them to grow faster than competitors. (The 100 hour work weeks could also allow them to work 2.5x faster than the traditional companies, as Elon has stated). It is interesting that 400,000 people have pre-ordered the Model 3, and Tesla hasn't spent a dime on advertising costs. The company truly has some fans. Again, similar to the small group of believers that Apple had as a following, which grew quickly as the word of mouth spread. There is no doubt that Tesla's product is better than the competitors' as of now. The challenge for some time will be production to keep up with demand.

The Model 3 is in focus right now. If Tesla can ramp up on Model 3 within the next year, competitors will start to feel the heat. Parts of their business might evaporate and they will have to restructure quickly to avoid the continued downward spiral. Of course this is the bullish view for Tesla, as fans would like to see a rapid transition from fossil fuel to electric vehicles. Competitors will be selling electric vehicles too, but no one knows how much GM loses each time it sells an EV, or how long it will take Ford to build or outsource a plant that produces batteries, or to get a charging network in place.

Tesla's factory can produce batteries for more than just cars. Currently the company has many projects where it can power utility companies and cities using large batteries for storing energy. This business on its own could contribute greatly to the company's sales.

The roofing industry in the US alone is a $10B industry, while it is about $70B worldwide. What if people started buying solar roofs? then they would need a battery pack to store the energy at night. With all this extra energy why not drive an electric car that can be charged by the sun. Tesla as an energy company fits in perfectly with the automotive side, creating a vast ecosystem, again similar to Apple. If you buy the Tesla Powerwall, why not buy the Tesla Model 3 as well, and the Tesla Solar Roof. It just fits, and there is no other company in the world that has this depth of vertical integration and ecosystem.

Thus with a little time Tesla will be well positioned to become the Apple of the car industry. We all know what happened with Apple. What if Tesla were to become the world's largest automotive company - but a new kind of automotive company that expanded beyond cars and motors, and delivered a seamless ecosystem of products and services. How could a slow-moving company with billions of dollars compete with that? Well they could dump billions to try and copy. Look at Faraday Future, a company that was given massive sums of money to build a car. They built the car. But the demo showed many problems that customers would not be happy about. This validated that Tesla was onto something, and it was actually difficult to build a car from scratch, let alone mass producing it and getting customers to buy it, and building the infrastructure around it. Meanwhile Faraday Future is having some financial issues, whereas Tesla flawlessly leap frogged the company besting its features in production vehicles.

While it looks like Tesla is overvalued on today's numbers, and even tomorrow's numbers, optimistic investors are not to short-sighted. They believe in a world of electric vehicles, and the only player today has the ecosystem and the vision to back it up, is in fact Tesla. It's the only pure play on an EV world, and investors are willing to pay up for that to get in on the ground floor, or perhaps at the 2nd or 3rd level in a skyscraper building. Tesla's vertically integrated model, its different and better product, and its ecosystem, gives the company many similarities to Apple. The size of the market opportunity for Tesla is in the trillions, meaning there is room for multiple players. But if Tesla is on the path to standing out among all the rest of the cookie-cutter car companies, then in 5 to 10 years it's not hard to believe that the stock could command a significantly higher market cap, and it could counter-intuitively be undervalued at this very moment despite its seemingly overvalued nature.