"And they ain't the kind that you can see."

U.S. Banks have been locked up in chains according to Republicans who have provided an update that they still want to unwind Dodd Frank. Over 28,000 rules were put in place since the great recession, which made large institutions even larger as small credit firms could not afford compliance costs. 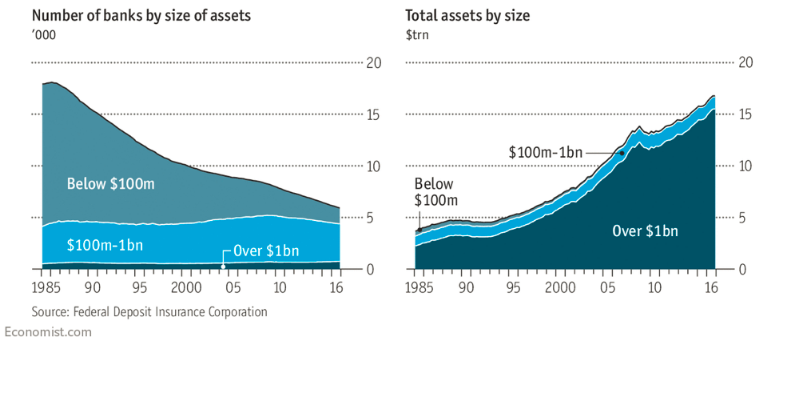 Some of the Regulations have caused the opposite effect in terms of of what was intended; for instance, in fact, large US Banks banks have grown in size since the great recession even though regulations were put in place to limit the size of these banks. Milton Friedman described in his book "Capitalism and Freedom" written in 1962, why this is actually the expected result of regulation. Friedman made an example regarding regulation of hair barbers and why barbers themselves were the ones who pushed for regulation.

"Each of us is a producer and also a consumer. However, we are much more specialized and devote a much larger fraction of our attention to our activity as a producer than as a consumer. We consume literally thousands if not millions of items. The result is that people in the same trade, like barbers or physicians, all have an intense interest in the specific problems of this trade and are willing to devote considerable energy to doing something about them."

Friedman's point is lawmakers typically make laws that reflect special interest groups who devote lots of times to the passing of laws while the consumer is barely effected by higher bank charges that its interests are not actually protected. The Republicans have recognized that Dodd Frank has hurt smaller banks and thus consumers. The new rules allow banks with less than $1 billion of assets to opt into less stringent regulations. The new act is yet to be voted on by Congress and many of the larger rollbacks would need Democrat support.

How does Salesforce.com have anything to do with the Internet of Things?