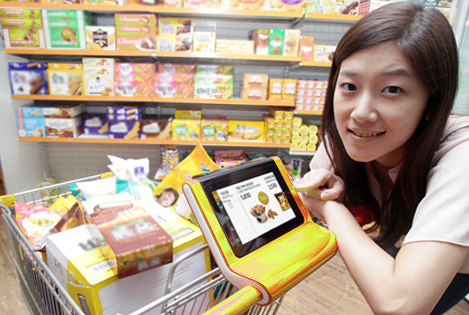 Grocery stores have probably been the slowest industry to make innovations within their businesses for the longest time. Their backend systems see incremental improvements with regards to technology and syncing purchased items with credit cards. Their front ends systems now use automated checkout systems, which has helped some stores open 24/7 with minimal employees during late hours, and thus cut costs. But can grocery stores take a leapfrog step to revolutionize the way people purchase their food?

While there are some grocery home delivery services, many people are hesitant to use them, as food quality is an important matter for households. But what if a customer can fill their cart up with all the food they want, and then simply walk out of the store without having to wait in line, and get emailed their bill?

Currently people waste hours of time simply standing in line waiting to empty their cart so that the cashier can scan it, only so that they can refill their cart, and then fill up their car once again. The process is mind numbing. Plus if there are people standing in front of you in line with overflowing carts, you’ll be stuck there forever. If all items in the store have RFID tags associated with them, such they your cart was automatically scanned in the blink of an eye when you were on your way out of the store, this could save a considerable amount of time and could be used to differentiate one grocery store from another in terms of convenience. RFID tags have come down in price, but there still remain a few challenges such as people taking the tags off certain foods. Of course nowadays people can still stuff their pockets with apples and the store will never know, so the honor system still remains in play at least to some extent. 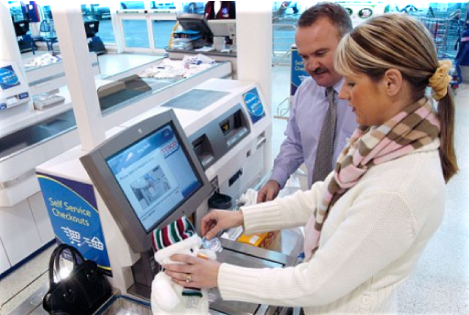 Amazon's purchase of Whole Foods is worrisome for the grocery store chains. The company has the ability to truly transform the way grocery shopping is done. not just with delivery, but the in store experience can change drastically, as Amazon can test and try new things to experiment with what works and what doesn't.

If when you walked into a grocery store, you scanned your shopping list using an app, and within a few minutes, automated machinery pulled your entire order off the shelves and filled your cart before your eyes... The shopping experience would be really cool and streamlined. While grocery stores may not like that, if just one store did that, they would certainly have a huge market share in front of them. But how hard is it to accomplish? Machines and robots may be expensive, but grocery stores have large budgets. If they ran the front end of their stores just like they ran the backend, or pulled a page from Amazon, they could have the entire store automated and dishing out orders at lightning speed. People would pay a premium for convenience and an innovation such as this would add tremendous value to shoppers.

Amazon also has a powerful robot army in each of its warehouses. It can apply similar techniques to grocery store in order to achieve a speed increase in the shopping process and delight customers with an agility they haven't seen before. It's game on for the grocery store chains as Amazon comes in to disrupt traditional grocery shopping.

Is Silicon Valley Really “Above the Law”?