Einhorn Isn't Getting the Green Light from General Motors 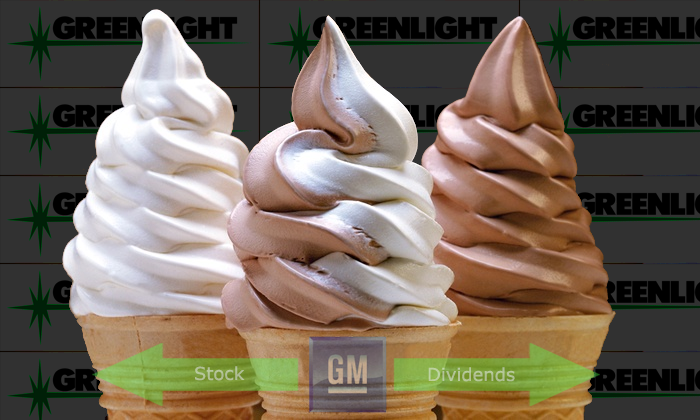 David Einhorn has taken it upon himself and his team to unlock the value of General Motors. The president of activist firm Greenlight Capital believes that GM's 5x PE ratio is far too low and that the company is being too conservative with its financial structure. GM is sitting on $60 billion of cash and investments and is not giving the desired return to Einhorn because it believes it needs to save for a rainy day.

Einhorn analogized the stock of GM as an ice cream cone which only had a swirl option available. But what if the chocolate was separated from the vanilla? Einhorn has proposed that the stock be split into two classes - one for dividends and one for stock appreciation—which he believes will attract more investors, and separation will raise the stock price. If GM received the same multiple as Ford, it would trade 30% to 40% higher than its current valuation.

In the past, Einhorn has been quite vocal about his stock positions and short positions and has made some very good value creating moves. As an activist, he has moved to deploy his own members onto GM's board to sway them to agree with his value-creating ideas. However, Einhorn may have short-term motivations and lack goal congruence with the GM board.

GM CEO, Mary Barra, was quick to shoot down Einhorn's proposal. GM is beginning to face new competition in the automotive industry, and the massive rainy-day fund seems to be the right way to go for the company's CEO. GM was bailed out by the US government during the Great Recession and the pains from the past still continue to keep the firm on the cautious side today to avoid a repeat.

While GM has the lowest PE ratio in the S&P500, it is still immensely profitable. This begs the question, how an automotive company with no profit in sight, in Tesla, can have a larger market cap than the dominant car company in the country?

When asked about giving a hypothetical $20 billion to either Tesla CEO Elon Musk, or GM CEO Mary Barra, David Einhorn leaned towards giving it to GM because it is aiming for a healthy 20% return on capital.

Realistically, GM doesn't need that kind of money, it already has it. GM can pull $20 billion from its bank accounts or raise the cash in a heartbeat. However, GM is having trouble finding avenues to deploy this cash and grow the capital. Tesla seems to have more ideas than it can handle, and would have no problem investing that capital. However, Einhorn believes that Tesla CEO, Elon Musk, is doing science experiments to determine what the future will look like 50 to 100 years from now—way further out into the future than Einhorn is willing to wait.

It is true that GM's low PE multiple may leave a large margin of error and that Einhorn's plan could unlock shareholder value, but he is not as familiar with the automotive industry as CEO Mary Barra, who believes the technology is rapidly changing and a rainy day fund is necessary. For now, Einhorn is confident that there is nothing lurking in the waters that would bring down GM in the immediate future even if it paid out its cash hoard to investors. Einhorn's fund is down nearly 3% year to date.

Rub a Dub Dub Thanks for the Grub