Google is still Standing on a Lowered Platform 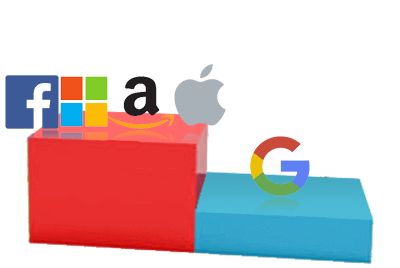 The Platform model may be a key factor that allows companies to exist far into the future. From an investment perspective, companies that live longer and can see growth in the out years are more valuable as a firm's valuation comes from its future cash flows. Companies that can survive forever, are hence worth more than companies that can't.

This article, Stevey's Google Platforms Rant, from 2011 states that Google does everything right. Except what do Amazon, Facebook, Microsoft, and Apple still do better than Google?

"That one last thing that Google doesn't do well is Platforms. "

One of the strengths of a platform comes from its ability to grow and gain a large network of supporters who have high switching costs. Look at Apple's app store, which had sales of $20 billion last year an continues to grow. It's a strong platform that gets continually improved and augmented by developers who may even earn a living off it.

Look at Amazon's AWS (Amazon Web Services) offering which has developers and companies hosting their products using Amazon's services. Amazon's CEO made the decision over a decade ago to switch to a platform/services model, which has helped the company grow fondly into the future, making Amazon now one of the largest companies in the world. Bezoes cared more about these services that his front-end web site which sold books.

Look at Microsoft's success with its Windows OS which allows anyone to create applications. Good applications continue to strengthen the platform as it drives more people to use it.

Facebook is another example of a product, one that we all see, backed by a powerful platform of developers. Games such as Farmville, Candy Crush, Mafia Wars, etc have contributed to billion dollar companies simply because of Facebook's platform.

The article argues that Google has yet to fully realize the power of a platform and has been getting it wrong all this time. While Google has grown to the second largest company in the world, the writer may not be focused on Google's Android Platform, but more on things like Google Plus. Or that the Google Developers website fails to mention the maps API among others. It's possible that Google could be much much larger if it transformed more parts of its business into an overall platform to better harness the power of developers and perhaps grow more in terms of scalability than it already has.

A platform may let users access the underlying API (Application Programming Interface) allowing them to customize and build better applications than the company could on its own.

"But I'll argue that Accessibility is actually more important than Security because dialing Accessibility to zero means you have no product at all, whereas dialing Security to zero can still get you a reasonably successful product such as the Playstation Network."

With the help of external developers - an asset not seen anywhere on the balance sheet - a company can grow and adapt its products much more quickly and at a higher scale than its competitors, allowing it to survive and thrive far into the distance.

TransCanada sues the US for $15B. Thanks, Obama

The Canadian Dollar, Oil, and the TSX