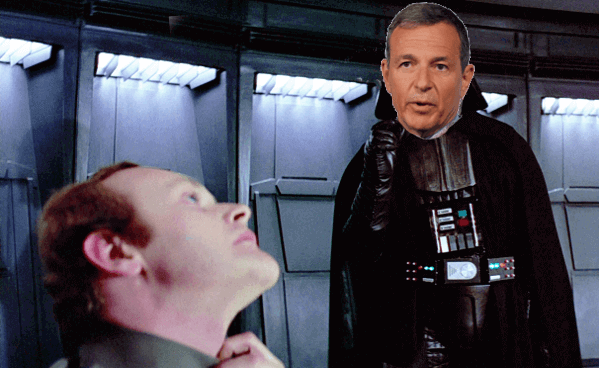 Disney CEO, Bob Iger, made a wise decision to purchase the Star Wars franchise from George Lucas. With it, not only came the core series of movies that is known all over the world, but also a global brand which can be applied to virtually anything. Disney is doing exactly that. It can expand on the Star Wars series infinitely into the future. With new movies, action figures, theme park rides, books, comics, etc. It is even putting Star Wars logos on make-up! The Star Wars brand is truly timeless, and Disney can be trusted to create long term value and growth with this new asset that it has only begun to exploit.

Investors are already quick to sell the news of the new movie "The Force Awakens" which has already posted astounding numbers. It is the fastest movie to date to reach $1B at the box office, and has already surpassed the last 2 star wars films combined in terms of box office gross sales. Is Disney a one trick pony? Is it all downhill from here? No, this is just the beginning of something much larger.

Disney reports earnings at the beginning of February, but in the meantime the stock has taken a hit, nearing the $100 level. That's down about 20% from the stock's highs. Disney's marketing effort for Star Wars has been tremendous, even harnessing the marketing force of Google to promote the brand. Investors will soon see the power of the brand. Financially, Disney's revenue stream just got larger ,now that its dormant asset has awakened and will rake in the cash quarter after quarter. Investors have been quick to pull the trigger on the stock, but longer term the Star Wars brand could be a small moon full of gold mines for the company.

Miss Molycorp had a Deal which was Sick, Sick, Sick!

Panasonic Speaks Highly of Invisible TV, but How Long Until Consumers See It?