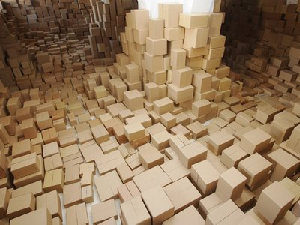 It is well known that Amazon is destroying every major retail company in it's path, as it revolutionizes the way we shop for goods online. While there is a growing path of destruction behind the company, there are also new businesses popping up and some major ones that benefit from Amazon's presence. FedEx for example has to shortage of shipments thanks to Amazon. But what about all of the boxes and packaging that is thrown away as a result of these shipments? Who benefits from this?

Waste Management is a slow-and-steady grower that should enjoy the excess packaging that gets tossed in the recycle bin by Amazon customers. Coincidentally, WM's ex-CEO David Steiner is also a director at FedEx. Though the company is now led by James Fish. Waste Management benefits greatly from garbage and waste disposal. Non-residential construction remains a key driver for their small amount of growth, but the increase in consumer garbage and recycling may help boost their revenues. Over the years, WM has taken a few steps to increase it's profitability despite a relatively flat but stable revenue stream. Cutting costs is it's number one priority as it is able to bring a higher percentage of revenues into the bottom line. For example, Waste Management's fleet of natural gas trucks continues to grow. The company produces its own natural gas from the methane in its landfills and can essentially power their fleet at a low cost. It has gotten to the point where a lower cost for this fuel actually hurts the company, as they are a net producer and would benefit from higher prices. Furthermore, WM has reconfigured its recycling business into a profit-sharing model rather than a revenue-sharing model. Previously, during bad times, when margins dropped, WM was still obliged to split the revenue generated by its recycling businesses with its partners. The company would take an even larger loss if it had no profit and was still required to give partners part of the revenue. Over the last few years the firm now shares it's profit, which makes it much more difficult for the company to drop further into the red. With Amazon loading up people's recycle bins, WM is sure to benefit in a small way as it recycles the vast quantities of paper.

While it make not be much to move the needle, even a small change in revenue at WM could increase profitability given the company's large fixed costs. During a time where Amazon is crushing all retails companies and broadening into other market segments, Waste Management seems immune to the tech giant for the time being and even stands to benefit from the paper waste left behind in Amazon's path of destruction.

Are the Apple iPhone 8 Rumors True?