The picture above is in China, in an actual ghost town, something investors fret about when thinking about their REIT investments.

Investors are selling their shares in Mall REIT's; SPG is down 7%, DDR 18% and GGP nearly 10% on the year. There have been reports of large scale closures of properties by retail companies. In fact, it was suggested that Aeropostale was purchased by Mall REITS in order to avoid further closures at their properties. Aeropostale plans to be a 240 store chain which is down significantly from its peak of 1124 in 2013. While Aeropostale is small, these issues are not exclusive to it. JC Penney , also struggling, announced the closure of 138 stores this month.

Others see it as a change in the industry, but do not see it as an Achilles heel. Incumbents such as GGP produced this chart from its March 2017 investor presentation . 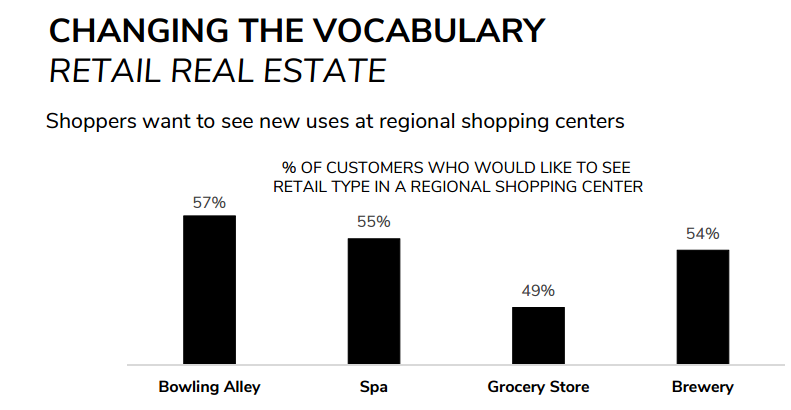 GGP is pointing out that you can take retail out of the mall, but you can't take the mall out of retail -in as much, that malls will lose traditional retail stores but will still be a place for commerce. However, even if we believe GGP's premise that the US is over-retailed and an adjustment will take place - this could still be a cause for disruption and an interruption of cash flows. GGP has over $18 billion of debt (page 26) and a disruption to its cashflow could lead to issues. It wasn't that long ago that it declared bankruptcy protection - at the end of 2008.

The CEO of Urban Outfitters, Richard Hayne, stated "It makes little sense to enter into many new, long-term leases at this time when all signs indicate that a similar lease will be less expensive in the near future,"

If stores are asking for lower rents because of lower sales, it means that mall operators will lose revenue. Hayne even described this as a retail bubble, which is now "bursting". While the future is not yet written for REITS, investors should continue to expect ample negative headlines regarding the latest store closures and failure of retail companies.