Not Yet In the Clear

Clearwater Paper Corporation (CLW) released first quarter results on April 19th since then its stock has plummeted from around $40 a share to $23 today. In the 9 trading days since, 7 of the 9 have been down.

Things are going wrong at the wrong time, adjusted EBITDA dropped from $50M to $39.8M from a year ago in its Q1 results. The issue is the drop is coinciding with a period of significant capital expenditures. CLW has spent nearly $100 million in cap-ex every year since 2011. 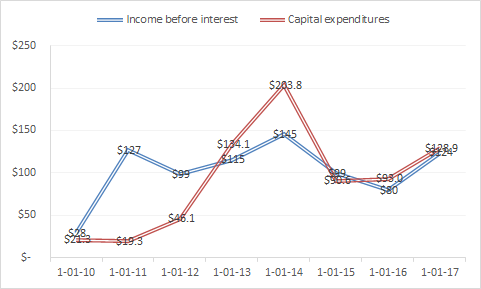 The company is expecting $290M of cap-ex this year, a massive amount relative to its expected income and EBITDA. CLW has the following covenants, which it could easily breach this year or the following year.

With $739 M of debt, which includes a $168.5M credit line and $571M of long term debt, the company may have trouble meetings its leverage ratios required by its covenants. CLW earned adjusted EBITDA of $190M last year. With planned cap-ex of $290M that implies that the company planned to borrow more this year; In its Q1 conference call, CLW said it had $124 million left under the revolver. The issue is two fold. 1) Adjusted EBITDA declined 20% from Q1 last year and this will make it harder to not breach the covenant. 2) As EBITDA declines, the company will need to borrow more money.

In an ideal scenario, if CLW were able to use its revolver and borrow a further $100M, it would be at $839M of debt ($100M in addition the $739 mentioned above) and if CLW were to maintain EBITDA of $190M then it would still be dangerously close to its covenants. Worse, the company is projecting $40 M (midpoint) EBTIDA next quarter, which again is lower than last year. A 20% decline in full year EBITDA would mean CLW would need to borrow above its revolver to finance its debt, and its EBITDA ratio would breach its debt covenant. Fortunately, for CLW, the interest rate does not expand to greatly with more leverage. When the company has a leverage ratio above 4 to 1, the company's interest rate becomes LIBOR +2% compared to currently Libor + 1.5%. CLW will likely need to get its main lender Wells Fargo to waive the covenant—but its always a risky game when you're relying on a favor from your lender. 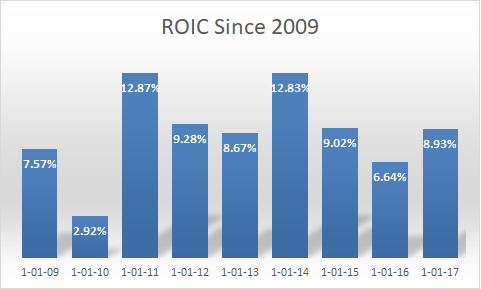 CLW has not delivered impressive returns on invested capital since its inception in 2009. The company's bonds are currently yielding between 6.3% and 7.1%, far above the original coupon. The company's weighted average cost of capital is likely above this number. The company is currently trading at 1.15 times its invested capital. CLW's internal model presented in its Q1 release suggested that CLW could eventually earn operating margins of 11%, which would translate into operating income of about $200M in operating income and represent about a 16% return on invested capital based on its current capital base. The intrinsic value of the company would be significantly higher if it could achieve these goals, but CLW's lack of ability to show high ROIC's and being a business that is suffering ,currently, from price deterioration in its key products should give investors pause for concern.

Are Low Volatility Portfolios The Future?