Earlier this month, Elon Musk posted the chart below which shows SpaceX's increase in market share over the years. The private company has put the United States back on the map as a leader in commercial launches into space, and appears to be dominating the industry. 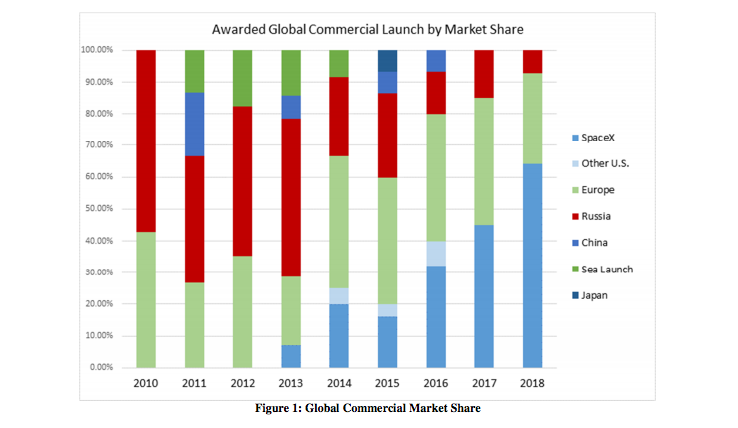 Although it seems like SpaceX is the only game in the high orbit aerospace sector, there are other US competitors. The United Launch Alliance, or ULA, is a joint venture between Boeing and Lockheed Martin. However SpaceX has been drastically undercutting their price (in some cases by a few hundred million dollars per contract) and thus SpaceX has already eclipsed its US counterpart. Commercial market share is also being taken away from Russia and Europe thanks to its low cost and reusable rockets.

Again, looking at this chart would make one believe that the US had no other players in the launching space. In comes Orbital ATK (NYSE: OA) a public company that has been flying under the radar. Orbital ATK is an aerospace and defense company and continues to launch military satellites for the US government. Just a few days ago on August 26th, 2017, Orbital launched a US Air Force military spacecraft using its Minotaur IV launcher. This is the 26th consecutive successful launch for the Minotaur IV.

The satellites aren't the only thing being launched into space, as the company's stock is up about 24% this year, nearing its all time highs. This also at least in part, rides on the back of tensions in North Korea, which has caused investors to jump into the defense stocks including Orbital ATK, since it provides for an array of military applications.

A Catastrophe for CAT Insurers?