Terex announced second quarter results yesterday and reported $0.98 a share non-adjusted and $0.51 adjusted. The adjusting items exclude the sale of Konecranes shares and restructuring charges. Terex's maligned cranes segment finally returned to profitability after losing $25.9 million last year adjusted and $32.8 million in Q1. Investors saw a profit of $14.5 million or 4.8% of crane sales. Aerial Work Platforms revenue slightly dropped to $593 million from $593.7, but operating profit dropped to $61 million from $72.5. For the first half of 2017, the company reported EPS of 54 cents a share year to date compared to 55 cents last year. In Q2, backlog grew by 36% year-over-year.

Terex has sold a total of $549 million of Konecranes shares and has used the proceeds to repay debt at 6.5%. Terex originally was given 19.6 million shares in Konecranes and $832 million in cash when it's sold its MHPS segment to the company last year—this was after the two companies agreed to end merger talks—Terex chose to rebuff ZoomLion's, a Chinese company's, acquisition attempt and then also cancel its original acquisition with KoneCranes, which was announced in August of 2015. The company continues to hold shares in Konecranes even after the recent divestiture of some of its shares in Q2. Terex's CEO, Mr. Garrison, also, increased EPS guidance to $1.05 to $1.15. reflecting improved net sales and operating guidance. Terex announced a new share repurchase program up to $280 million. The updated guidance is shown below: 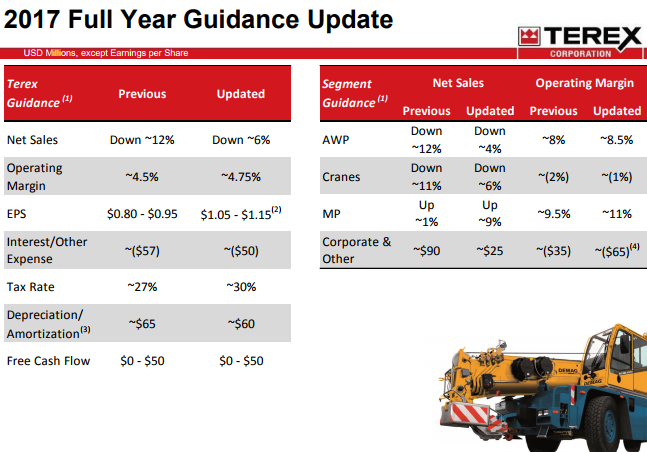 Does the Tesla Model 3 Need to be Perfect to Dominate the Market?