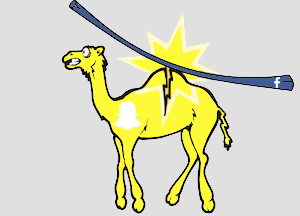 The company behind Snapchat (SNAP) recently came public, rising 40% on its first trading day and swinging wildly ever since. Snapchat has over 160 million users which could increase quickly in the near future thanks to all the buzz and hype around its initial public offering. The bulls are calling it the anti-Facebook, and believe that the valuation can increase above the current $20B mark. This can perhaps be justified when compared to Facebook's $21B purchase of WhatsApp in 2014. WhatsApp grew to 500 million users in early 2015, and now in early 2017 has over a billion users. Snapchat has a long way to go to achieve this level of users, but perhaps its monetization prospects are better than WhatsApp's.

Snapchat recently started monetizing its users, so it is still not certain as to how profitable the company can be and how it can grow its earnings. In the last reported quarter (Dec '16) the company reported $165M of revenue, compared to just $32.7M in the same quarter of the prior year. That's a 5x gain in just one year which is very impressive.

Despite the impressive revenue growth, many bears have begun betting against the stock due to its perceived overvaluation. What would really stop the fun at SNAP is if the user growth came to a halt or went down. This would indeed reverse all of the bullish models that the analysts are using to value the firm. Could this happen to Snapchat? In the near term, it does not seem likely as Snapchat is still ramping up and gaining traction. However the competition is getting to be ruthless. Namely Facebook has been early in the game in seeing the threat that is Snapchat. Given Facebook's size, the company has moved very nimbly to capitalize on Snapchat's popularity. Facebook has already added Facebook Stories, Instagram Stories, and Messenger Day integrated into its current offering and as separate apps. These apps have definitely gained in popularity but it is still too early to tell if this will take away from Snapchat's users.

Apple has even announced the release of its new Clips app which offers fun ways to add filters to photos and videos. As Apple does not have a social network of its own, these creations are meant to be shared on other social networks. This could benefit Facebook once again, as a way of bringing Snapchat-like features into any social network, including Facebook. If Facebook is the medium used to access all of your friends, then there may be no need for another platform such as Snap.

The competition from Facebook is growing rapidly, but it may be some time before Snap notices its effects. If companies keep hacking away at Snapchat's marketshare and ideas, eventually there may be an sudden negative reaction in the stock price due to the cumulative effort to play in Snapchat's space.