There is one Bright Spot in the Market 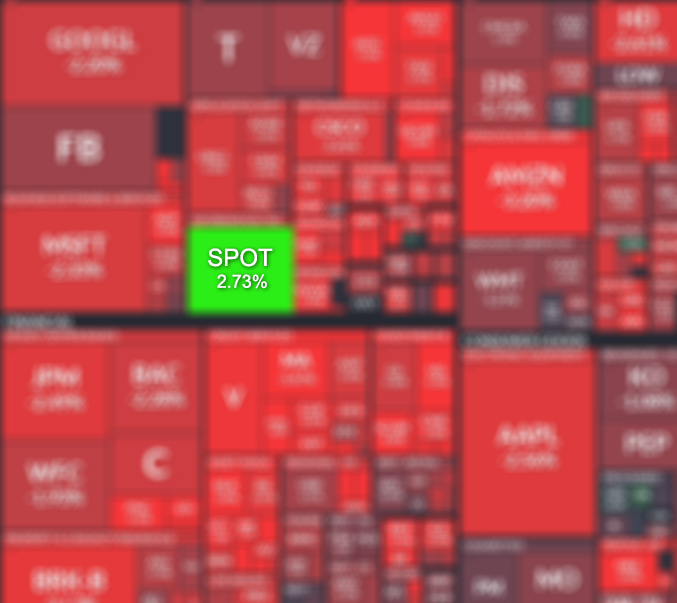 While the Dow Jones Industrial Average sunk 572 points on Friday and instilled fear among investors, there was one stock that stood out in last week's major sell-off. Spotify cast one of the few bright glows in the marketplace, as the stock rallied almost 3 percent while everything else was down.

The company which boats over 30 million songs recently IPO'd in what some call a "non-IPO". Spotify did not raise capital with its newfound currency, but instead allowed its shareholders to begin trading on the public stock market. There was no lock-up period as there usually is, which means that all of the previous shareholders who were able to get Spotify shares for much lower (which is everyone, given that the stock opened higher than any private valuation) can sell their shares right away. This created a fairly uneventful IPO, with waves of sellers cashing out.

Assuming an approximate (and conservative) 184M share count, the stock opened at $165 which valued the company at over $30 billion dollars. As sellers continued to dump their shares, the stock slowly gave back its gains over the next few days and now sits at $147.92 per share with a market cap of just over $27B, slightly below it's IPO price.

Spotify has the largest paid user count for a music-based service with 71 million paying users. The company has a total of 159 million users, but the difference don't pay and instead watch and listen to ads. Apple Music is Spotify's closest competitor with 36 million paying users. Of course, Apple's users are mainly limited to Apple's ecosystem, so Spotify can address Apple users, and the rest of the world as it currently does. Spotify users listen to music approximately 148 minutes a day on average. The nice thing about the music service, is that users can multi-task and listen to music while running, working, or doing something else. This is in contrast to video content which usually requires the user's full attention. That said, Spotify also offers video streaming services.

In mid February 2018, Spotify was available in 61 countries, but the company continues to expand. Its growth rate for paying users was over 40% as the company works to convert its non-paying members into paying subscribers. Spotify is growing rapidly, but it is difficult to compare the firm against another publicly traded pure-play.

One good comparison is with Netflix. Although not a direct competitor, Netflix has a similar offering to Spotify, but for video. In a sense the companies are competing for users' time. Currently Netflix has higher gross margins that Spotify but both are growing their businesses at a rapid pace. Netflix has over 117 million paying users which is more than Spotify's 71 million, but less than the total member count of 159M which includes members who watch ads. Both Netflix and Spotify have the problem that they are essentially content aggregators and they license their content from third parties and pay large premiums. Sony for example is Spotify's 5th largest shareholder, but also owns the licensing rights to many of the songs played on Spotify. Netflix on the other hand has decided to focus on making original content that it can freely license in any country wherever it wants. This might be more difficult to pull off for Spotify but it is certainly possible for the company to provide its own exclusive content. Netflix is currently valued at $125B, grows about as fast as Spotify, and charges about $10 a month, which is similar to Spotify's subscription price. The company made about $11.7 Billion in sales last year. In contrast, Spotify made about $5B USD in 2017 sales, about 42% of Netflix. However Netflix is quite profitable and has a positive PE ratio although a very high one. Spotify on the other hand plans to lose tens of millions of dollars each quarter for the time being as invests heavily in growth. Still, even at 30% of Netflix' valuation, Spotify would be worth $37B, an increase of 37% over today's trading prices.

While Netflix isn't in the music business, it was useful to compare the two companies because of very similar business models and prices for the service. Dropbox is also an unrelated technology company, but it is a recent IPO that has a similar subscription-based service to Spotify. Dropbox is valued at $11.8B. The company also is unprofitable, but has 500 million total users. However, Dropbox has a much lower percentage of paying users than Spotify, although some of its clients may pay more for more storage. Dropbox has over 200,000 paying users. Additionally, Dropbox has collected a sum of $1.1 billion in revenue in 2017. This is about 4.5 times less than Spotify, yet Dropbox sports a hefty valuation after trading for the last few weeks. It is likely that Spotify's no-lock-up period due to its "non-IPO" has held the stock down. If Spotify received a similar valuation, it would be worth $53 billion, a 96% increase over today's price. However, that said, Dropbox has the advantage of falling costs to run its storage business. While storage is somewhat of a commodity especially compared to music, Dropbox has quite a bit of control over its cost of good sold, whereas Spotify is hostage to the record labels. Thus Dropbox may deserve a premium valuation as compared to Spotify. Just as a reference, Dropbox's revenues were $600M, $844M and $1.1B in 2015, 2016, and 2017 respectively. However its cost of good sold went from $407m, $390M, $369M in those same three years respectively. This shows the power that Dropbox commands over its costs and the falling price of storage prices in a Moore's Law type fashion.

Spotify is a rare "unicorn" type company that was very valuable as a private company and was listed on the public exchange. It has a strong and rapidly growing user base while its users are sticky like Netflix users, as its value proposition is very compelling - all-you-can-listen-to music for $10 a month. While it is difficult to value a company with such high growth and few direct and independent competitors, a comparison with Netflix and Dropbox which have similar business models, show that Spotify isn't as richly valued as these two. Spotify is an interesting opportunity as its non-IPO may be creating a constant wave of sellers that are temporarily holding the stock price down. If Spotify can prove itself over the next few quarters, to show investors the continued strength of its business, its valuation has some room to run before it reaches the same level as other leaders such as Netflix and Dropbox.