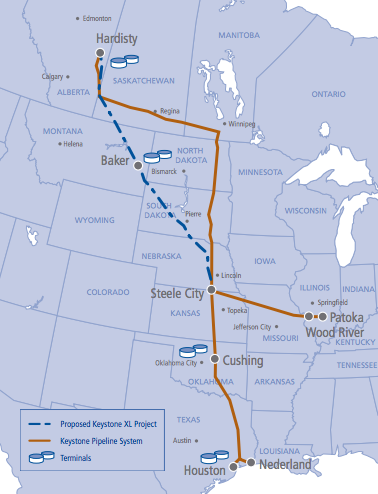 After years of attempting to get its pipeline approved, the Trump administration has hastily granted a permit to build the Keystone XL. In the past, Obama had fought against its approval, citing that it would increase the effects of global warming to refine and use the oil from the Canadian Oil Sands in the US. However it seems that regardless of whether the United States accepted the pipeline, the oil would still be used somewhere around the word. For example, China is energy-hungry and would be happy to use the Canadian oil.

Although the pipeline is viewed as a negative, there are many benefits that will come with it. More jobs created in the US and Canada, and not just direct jobs of working on the pipeline itself, but jobs supporting these workers (such as transporting the materials for the pipeline, adding nearby grocery stores to support the employees etc). US Steel companies should also benefit as Trump has stated that United States steel should be used to construct the pipeline. This rule should give the ailing steel market a boost, but it could lower the price of other steel as the pipeline companies will likely dump any foreign steel they have amassed into the market.

Another effect that the pipeline will likely have is reducing the price of oil. If there is much more oil coming into the US, the excess supply could lower the price at least until the US's growing demand picks it back up again. Demand for oil in the US has been growing over the years, citing the need for this pipeline. Pipeline are the most efficient way of transporting a liquid such as oil. Using trains, trucks, and boats to bring in oil from overseas is highly inefficient. Replacing these methods of transport may actually offset environmental damage caused by transportation of crude. For one thing, boats carrying crude that leaks cause much more environmental damage than a more contained leak on the land which is less likely to occur in an enclosed pipeline.

North American energy independence may be one step closer with Keystone. If the US can be self-sustaining (with Canada's help of course) this will lead to less volatility caused by events overseas.

Overall the pipeline has its pros and cons, but ultimately it may benefit the US economy more than people think, and it may do less damage to the environment than people perceive thanks to the efficiency of its transportation of crude.