TransCanada sues the US for $15B. Thanks, Obama 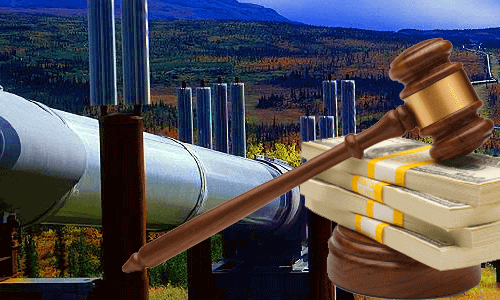 TransCanada Corp is suing the United States government for $15 billion for breaking its North American Free Trade Agreement obligations. The document which TransCanada is bringing to court can be found here.

The Keystone XL Pipeline has become a political chess piece rather than a means of securing the delivery of North American oil to where it is needed in the United States.

TransCanada had customers who "already committed to binding contracts totaling 300,000 [barrels per day]"

This number quickly increased to 720,000 barrels per day, showing that there was a long term need and demand for such a pipeline.

Yet, even though multiple studies showed that the pipeline would not have a material increase in pollution, politically the pipeline was seen as a pollution nightmare.

"Since the crude oil delivered by the Project would be replacing similar crude oils from other sources, the incremental impact of these emissions would be minor"

Crude oil is currently brought to the US from overseas in the US using ships, which also have a much greater risk of leaking into the ocean than land-based pipelines. Furthermore, the oil will be coming down the US anyways via rail and truck, which is much less efficient. A single pipeline can take 15000 tanker trucks off the road.

TransCanada has a long and detailed account of the matter in the document that they have published, which is actually quite an easy read for the non-lawyer individual. TransCanada's case is made stronger by the fact that the US approved other pipelines in the meantime, just not TransCanada's.

No one has ever beaten the US in court at their own game due to political sway, but TransCanada may be the first. The company does have billions of dollars in damages to show for and wants it all back from US tax payers.

Panasonic Speaks Highly of Invisible TV, but How Long Until Consumers See It?

Google is still Standing on a Lowered Platform