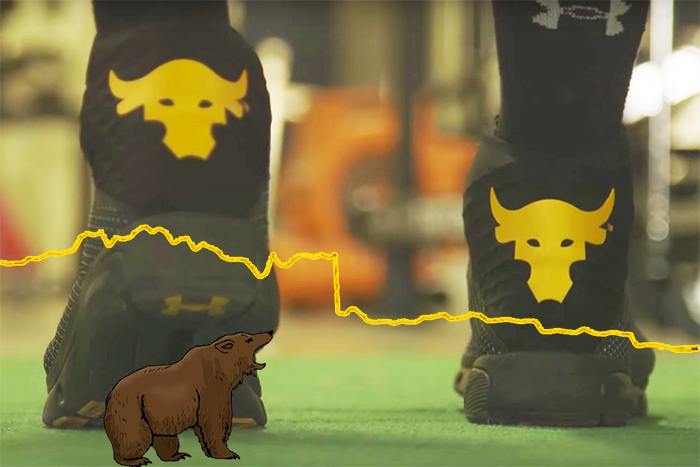 Since early 2016 Under Armour has lost its footing. The company has been battling declining sales growth and was up against difficult compares. Even a slight dip in its growth forecast can and did send the shares into a nose dive, especially since investors are betting big on the company giving it a rich valuation.

Even after a 75% tumble over the last year, UAA still has a steep 46x price to earnings multiple.

However it looks like Under Armour might be in for a comeback as it looks for ways to stop the bleeding. Dwayne Johnson, The Rock, has introduced a set of sneakers which it selling like hotcakes. The sneaker is sold out and Under Armour has the high quality problem of needing to restock. The Under Armour Project Rock Delta sneakers may be the first in a lineup of new wear from The Rock. Given the Rock's increasing popularity thanks to starring roles in many new films including Disney's Moana, people are flocking to Under Armour to get a hold of a new pair of sneakers. While popular with the fans, Under Armour needs sales large enough to move the needle for the company or to reinvigorate enthusiasm in its growth story.

That said, footwear was already a bright spot in 2016, so Under Armour still needs to turn around its other business lines to please the crowds, while maintaining rapid growth in its shoe business. The turn may not come imminently, but perhaps the newfound excitement around the Rock can help turn some bears into bulls while the company tries to get its feet back in the rink.