We're Still Having Fun and You're Still the 'Capital' One 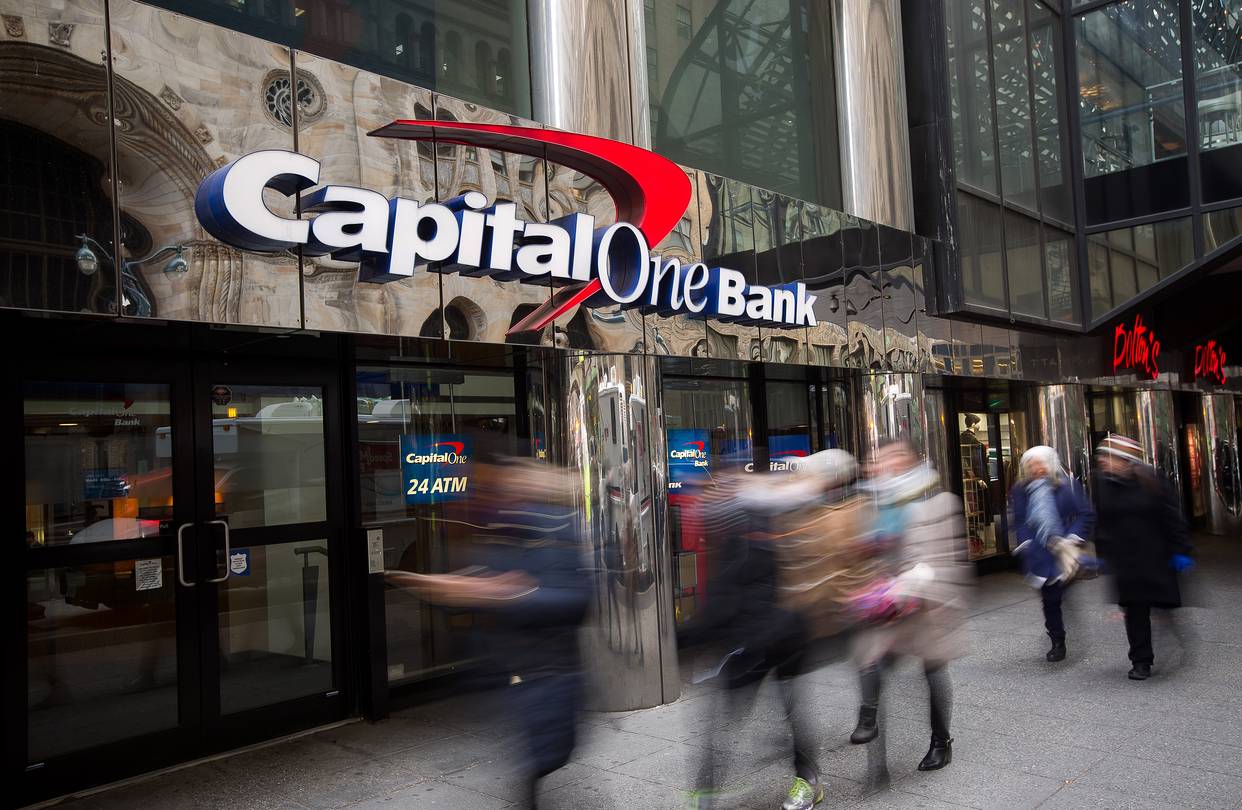 Capital One Financial (COF), the Richmond Virginia based lender, reported third quarter results last week that easily beat analyst expectations. Analysts estimated $2.15 of EPS compared to the adjusted $2.42 that COF reported. This compared to $1.94 of earnings in Q2 of 2017 and $1.9 per share in last year's quarter. Capital One also said that $114 million of provisions were due to Hurricane Harvey while there was a gain of $69 million related to investment sales—these amounts were not included in the adjusted EPS number. The company's Net Interest Margin (NIM) improved 20 basis points to 7.08. Higher net interest margin means COF earns more for each loan on average compared to what it costs to fund the loans. Loans increased by $8.1 B compared to the prior quarter; however, $5.7 B of the increase was from the acquisition of Cabela's portfolio. Cabelas is a large sports store that was acquired by Bass Pro Shops in 2017. Bass Pro shops decided to sell off the company's credit portfolio. Capital One did have issues acquiring this portfolio. Eventually, Synovus Financial, the 47th largest bank by assets, acquired the assets of Cabelas for the purpose of selling it to Capital One; the assets were sold on September 26th.

It is speculated that COF had issues relating to a 2015 probe by the Office of the Comptroller of the Currency (OCC) who wanted COF to address concerns with COF's anti-money laundering provisions. In COF's latest annual report, it said that it expected heightened oversight from the OCC. It is also possible that this increased scrutiny led to Capital One Financial receiving only a conditional passing grade in June by the Federal Reserve on it's Comprehnesive Capital Analysis and Review plan. The regulator was vague and stated that Capital One was weak in how it “estimates the potential impact of 'risks in one of its most material businesses.'" However, the regulator did not state which business carried this weakness. Capital one is required to submit a new plan by December 28 or risk a dividend cut. Others have suggested that COF’s conditional pass was political. According to this analyst, COF conditionally passed the qualitative portion of the test, which "is vague."

Despite some negative news, Capital One reported strong results in a number of its businesses:

Credit Card: Its credit card division reported earnings before taxes of $878 million and $572 million after taxes. Period end loans increased to $109B, which was 10% growth compared to the prior year. Some of this growth related to the purchase of Cabela’s credit card business. COF’s growth in credit cards excluding the Cabela acquisition slowed down relative to the industry. For instance, Capital One grew credit card deposits 4.8% year over year in Q2 and 6.9% in Q1, but this was slower than the industry. The industry credit card loans grew at 7.5% year over year in Q2 and 7.3% in Q1. This slowing of growth corroborates to statements by Capital One’s CEO, Rich Fairbank who has suggested that the growth window is closing. Fairbank said “the main thing I want to say is, we have capitalized with exceptional growth during a window, a kind of sweet spot in the competitive environment, and where the consumer was really where the whole industry was, (and this) led to exceptional growth for several years.” Capital One’s credit card divisions loans’ grew at over double the rate of industry growth from Q2 2014 until Q4 of 2016. 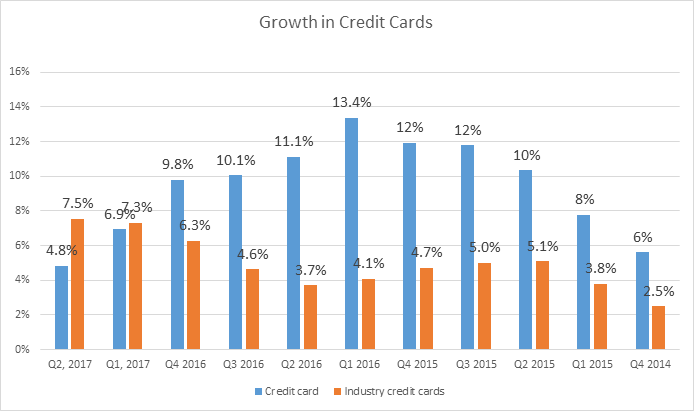 According to Fairbank, this policy has caused higher loan losses than what would be expected in future years while the loan is in phase 1 status. Fairbank said “phase 1, is marked with upfront and rapidly increasing losses (and) Phase 2, the sort of stable part where everything's settling out." COF’s credit metrics have suffered as a result of this high growth or as COF calls it "growth math".

COF’s charge-offs have increased from a low of under 3% of credit card loans to hovering around 5%.

Consumer Banking: COF’s consumer division, with $76B of loans, reported earnings before tax of $497 M and earnings after tax of $316 M. This was a 14% increase compared to the prior quarter and 30% compared to the prior year. The provision for loan losses increased from $293 million compared to $256 million last year. This division is the source of most of COF’s low cost deposit base. COF has $239 B of total deposits, and the consumer banking division has $185B of this amount. The net charge-off rate rose by 21 basis points compared to the prior year at 1.47%. The non-performing loan rate stayed flat at 0.71% of all loans. Fairbank suggested in the Q3 conference call that COF did originally seize on the growth in auto loans but then pulled back as industry standards loosened. Auto loans at COF have grown from $24 B in Q1 of 2012 to about $53 B today. Auto loan charge-offs have remained relatively stable. The current loss rate is 1.96% compared to 1.7% in Q2, but charge-offs have been between 1.2% to 2% for the last few years. Capital One’s origination of lower FICO score auto consumers remained stable at 31% of its auto loans. Many investors have been talking about a bubble in auto loans similar to what we saw in the 2008-2009 mortgage crisis. However, auto loans comprise a much smaller proportion of total loans in the US. 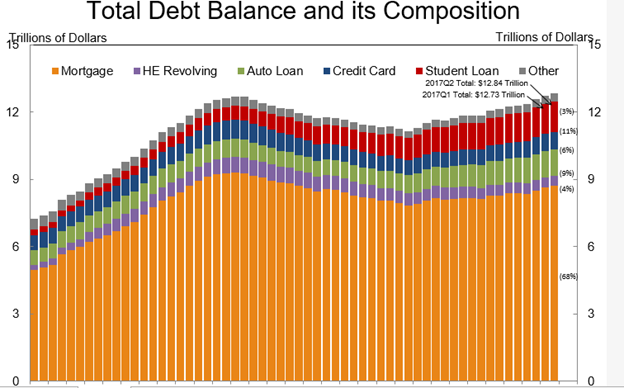 Median credit scores for auto loans have risen since 2008. 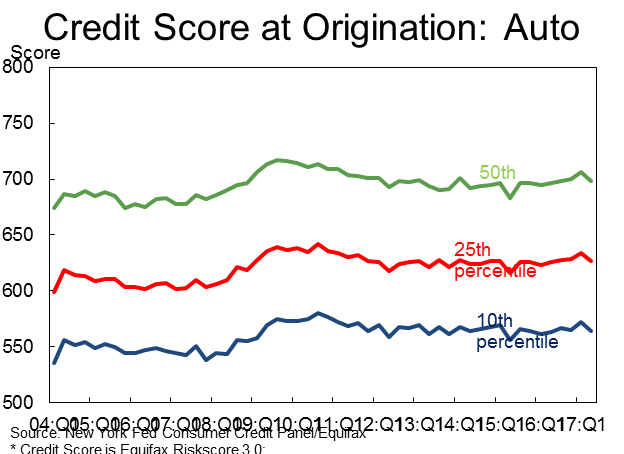 While there has been tremendous growth in auto loans, it is yet to be seen if there is a bubble. The metrics suggest that this may not occur.

Commercial: COF’s commercial business recorded a profit of $282 M before taxes and $179 M after tax, which was above last quarter’s $146M but below last year’s amount of $191M. Loans remained flat compared to the prior quarter while deposits slightly decreased. Net charge-offs grew as a percent of loan losses to .96% from .8% last quarter and .66% percent in last year’s quarter. COF’s criticized loan portfolio has increased over the last two years because of the declining oil price and competitive pressures in the taxi industry. At this point in time, COF has taken a large amount of loan losses related to its taxi portfolio and has classified all the loans as fair value. It’s oil portfolio continues to improve as oil prices rise. COF has continued to improve its efficiency ratio (lower is better) 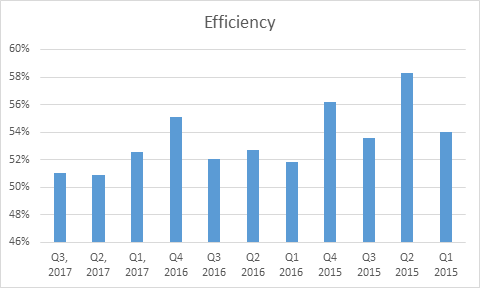 Going Forward: Efficiency ratio is calculated as non interest expense divided by (net interest income + non interest income). The lower the number is the less expenses the bank has relative to its revenue. COF expects to lower this number over time. Scott Blackley, the CFO of COF, stated “and then, on the positive side, a little bit of opportunity in terms of where we're going with efficiency. But that's – we've made lot of progress on efficiency.” COF expects growth math to moderate in 2018. Growth math, according to COF, is the amount that COF’s sacrifices in extra loan losses at the early part of a credit card loan. Once these higher loss accounts are charged off, the company is left with a book of business that tends to have lower charge-offs. This book is called by COF to be its back-book. The company re-affirmed its earnings guidance for 2017, which is 7% to 11% growth. This amount is growth based on the adjusted number that COF earned last year, which was $7.21 a share. The company also expects solid EPS growth in 2018 despite having a small tail of growth math.