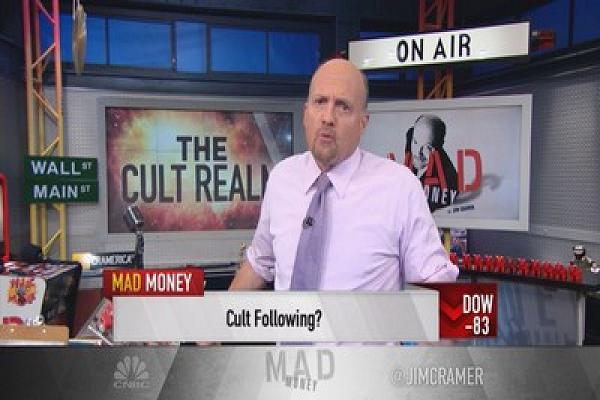 "[A Cult Stock is a] classification describing stocks that have a sizable investor following, despite the fact that the underlying company has somewhat insignificant fundamentals." -Investopedia

Jim Cramer won't opine on several fast-growing stocks in the market as he believes that they are "cult stocks" in which a decision can't be made of whether or not to buy or sell the stock, as per the definition above. A cult stock may be producing a lot of investor hype but in reality, it has more fans than it does profits.

Cramer has called stocks such as Amazon, Netflix, and Tesla "cult stocks". Even though the acronym FAANG, which contains 2 of these stocks, represents a list of fast-growing companies that originally all started out as cult stocks.

The FAANG group, which includes Facebook, Amazon, Apple, Netflix, and Google, has shown a significant positive return on investment. Had you bought these companies in their infancy, when they all could have been easily classified as "cult stocks", your portfolio would be up tremendously. FB is up 343% since its dismal IPO in 2012. Netflix and Amazon, still considered cult stocks today, are up 7300% and 1300% respectively in the last 10 years. Even Apple and Google are up 2000% and 1000% in the last 15 years and are both near their all time highs.

Admittedly, there are many companies, especially during the tech boom and bust, whose stocks rose far past any level sustainable by the earnings. What seems to make these cult stocks different, is that there actually is an underlying product, however there is no earnings. In Amazon's case, the $500B company only made $197M last quarter, while Netflix's $78B market cap was supported by only $65M in earnings, as both companies have PE ratios in the mid 200x range. Tesla loses money, but still has a $52B market cap, which many feel is not justified based on its past earnings. That said, in their infancy, Apple, Facebook, and Google were once "cult stocks" with a small number of believers, despite a lack of positive financial metrics.

So what changed? When did these companies stop being cult stocks? When Facebook IPO'd just a few years ago, many thought that the social network was worthless. After all, the stock sank almost 50% from its IPO price, and was easily considered a "cult stock" for its vast market cap, lack of earnings, and 'small' number of believers. However, today Facebook is up 7-fold from its lows and has a reasonable PE multiple of 36x given its still-rapid growth rate. Plus the company has 2 billion members on its platform - clearly not much of a cult anymore. Even Netflix and Amazon, who show little profits are growing revenue and membership faster than most other companies, as they dominate the media and retail industries respectively. While they are still considered "cult stocks", they have also been great investments. When will they lose their "cult" status? Is 100 million members still a cult for Netflix? Does raking in $38 billion a quarter still make Amazon a cult?

The problem with applying the "cult stock" definition to these stocks is this phrase right here "the underlying company has somewhat insignificant fundamentals." It turns out that all of the FAANG stocks have real, actual products and services that they provide. And although they may not be fully monetized right away, they all had the ability to grow rapidly and gain market share through disruption. Actually, the "sizeable investor following" is a very powerful business strategy when building up a company. If a small group of people love your product and your company, they will become the unofficial ambassadors for the company through word of mouth, which helps to grow the company even further.

So calling a company such as Tesla for example, a "cult stock" may actually be very positive, despite its negative connotation. The company does have a very real product - an electric car that many believe is the way of the future and has potential to disrupt the gas car industry. The company already sells $2 billion of cars each quarter and has proven that it can disrupt the luxury end of the car market with a better car. Already by its definition, Tesla can't be a real cult stock if its underlying fundamentals are quite significant, albeit on a small scale. The company has a "sizeable investor following" which not only believes in the company and its product, but spreads word of mouth, informing others about it. And finally, the stock has actually been a good investment despite the pundits throwing around the term "cult stock".

The bottom line is the misuse of the word "cult stock" when referring to a disruptive company or product. A cult stock indicates no underlying product or fundamentals, however, a passionate following coupled with a disruptive product is in fact a good business strategy than contradicts the idea of a cult stock. While "cult stocks" may have high valuations and low earnings, a rapid growth rate could lead to bountiful future earnings.