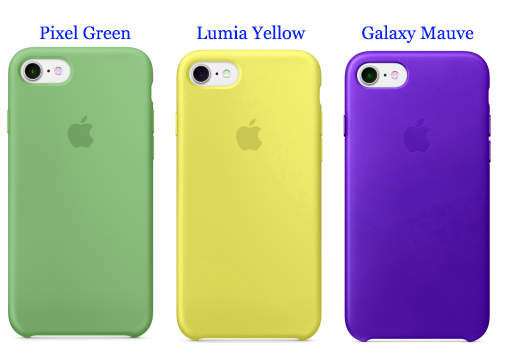 Apple has always had a sense of humor. It made fun of Microsoft for years in its commercials with Mac and PC. It even named it's social music service iTunes Ping at a time when Microsoft Bing was new to the market, like demonstrating very subtly that both names were ridiculous (Ping has since failed however while Bing is still hanging in there).

Interestingly, Apple had made a similar gesture last week when it released the new iPad (which is called iPad). Apple announced some new colors for its cases and watch bands including: Azure, Pebble, and Berry.

At first glance, this may be nothing out of the ordinary, but these names may subtly be aimed at taking a shot at other companies. The name Azure is a popular color, but it also happens to be the name of Microsoft's cloud solution. Try searching for "azure" in Google and see what pops up - all links pointing to Microsoft. Berry on the other hand, might be a slight poke at what's left at BlackBerry, but Apple is no longer competing with them. Calling its watch band color "Pebble" must also be pretty funny to Apple, as Pebble was a direct competitor to the Apple Watch (search for "pebble" on Google to see Pebble Smartwatch as the top results), but Pebble has since been turned into rubble by Apple and other competitors.

Are these just fancy names of colors, or is there more to this tomfoolery? Apple has minimized the brands of these companies by making them into simple colorful names. It also groups Microsoft's Azure in with failed competitors, assuming that you believe that Apple's naming is more than just an accident.

Jokes aside, when Apple launches a product, it gets tons of media attention and people writing about every little feature that they release. Perhaps with these colorful names, Apple will rank itself higher on Google search, and thus its possible marketing ploy would be a small success if it could grab the Google results for failed brands, and have a good laugh in the meantime. For instance, what if someone googled for "Pebble" a few weeks from now hoping to find a smartwatch, but instead sees that the top results were instead Apple Watch Bands colored in Pebble. Why not nab these results and get a bit of free advertising for it.

If this helps Apple in any way, they should name all of their colors after competing firms. Why not get your iPhone in Pixel Green, Lumia Yellow, or Galaxy Mauve. With all the buzz that the company generates, it can perhaps move up in the Google ranks. In the end, why not try to capitalize on some extra hits from Google while at the same time getting a good laugh coming up with these colorful products.