Capital One Financial poised for a strong 2018 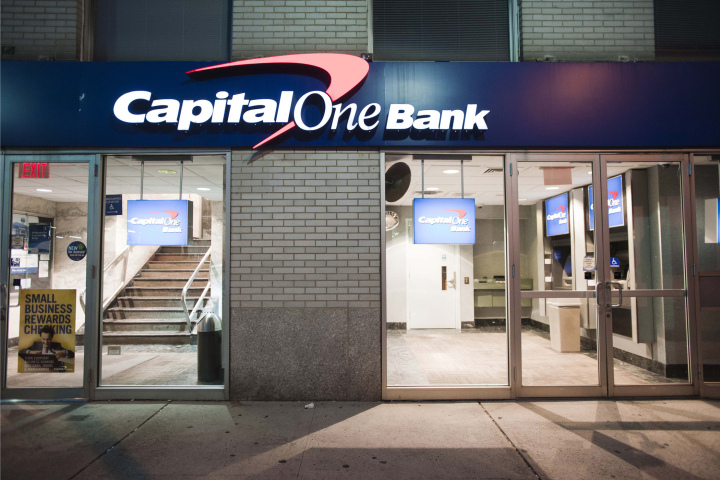 However, provision expense was substantially different than estimated despite the rest of the forecast being near exact. 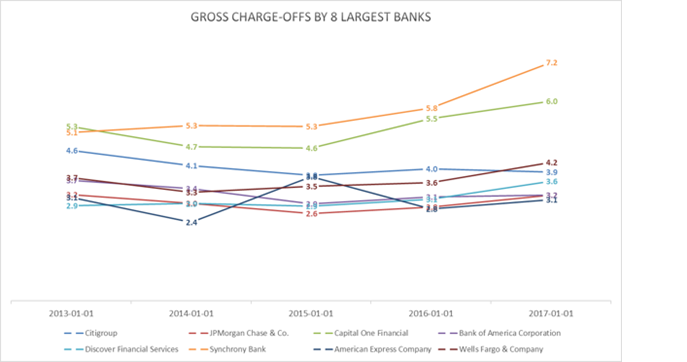 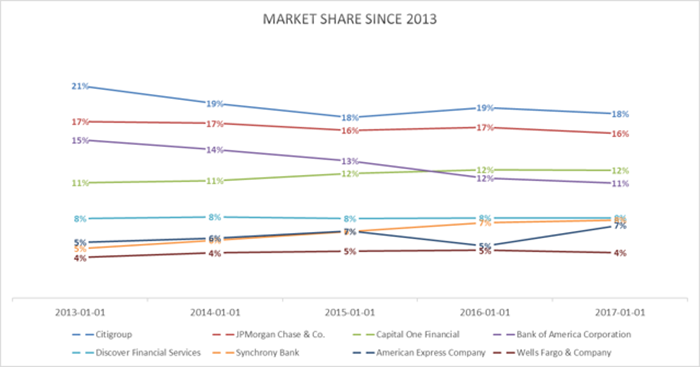 COF, AXP and SYF and WFC have grown their market share since 2013, with AXP and SYF being the most aggressive.

Credit losses were expected to improve in 2017 as “growth math” stabilized. The esoteric term was explained by COF’s founder and CEO, Richard Fairbank who, in 2016, said COF was trying to capture on a growth window and would see elevated charge-offs in 2016, but losses were expected to moderate in 2017. The 2018 model will be cognizant of the factors mentioned above. 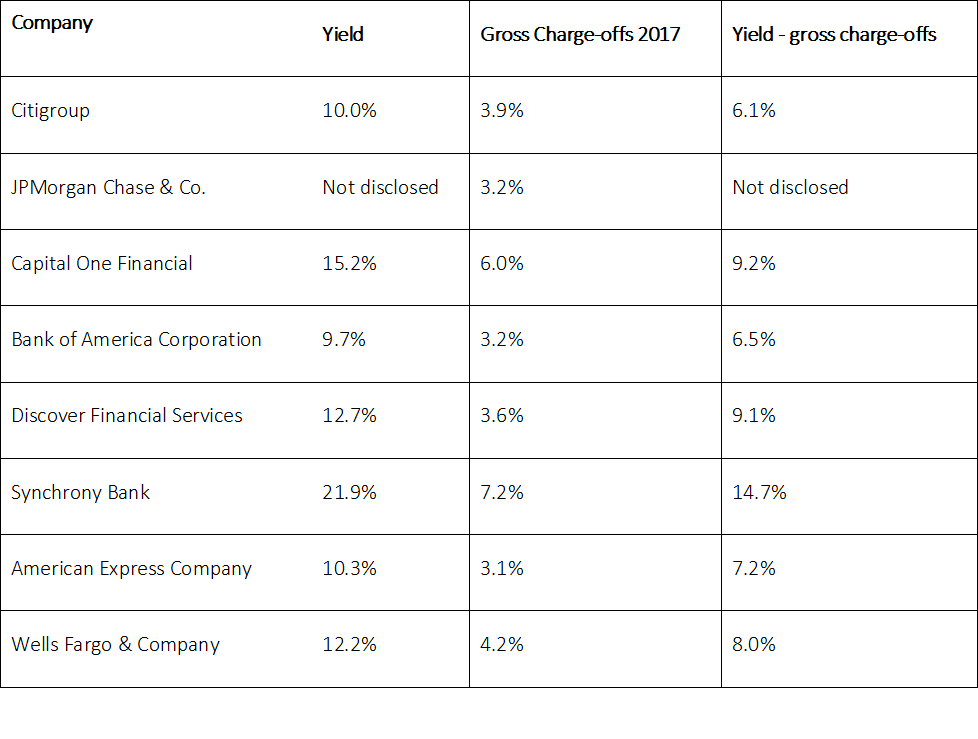 Growth math can be further elucidated by the following example: when COF finds 10 new customers, 3 might be bad customers, but the 7, good customers, that stay around tend to remain a member of COF for a while. These 7 credit worthy borrowers eventually transition from growth book to the so called "seasoned back book." The unseasoned customers drop off. The seasoned back book produces lower losses because it is made up of the most credit worthy customers. If COF were to slow growth then its book is made up of more credit worthy borrowers and therefore has lower charge-offs.

Actual domestic charge-offs were $4.738 B in 2017, far above the $4.332B estimated in the beginning of 2017. The company built provisions of $6.1 B for its credit card division in 2017. Charge-offs including its international were $5.054 B (international is around 10% of COF’s Card business). COF said, in its 2016 conference calls, growth math would moderate in 2017, but it accelerated, meaning the company built reserves—charge-offs were $5B but provisions were 6B—a build of $1B. Provisions exceed charge-offs either because a bank is growing loans or it expects higher future loan losses. Since Q2 2013, the company has had provisions/charge-offs on average of 113% (for the entire business not just credit card) 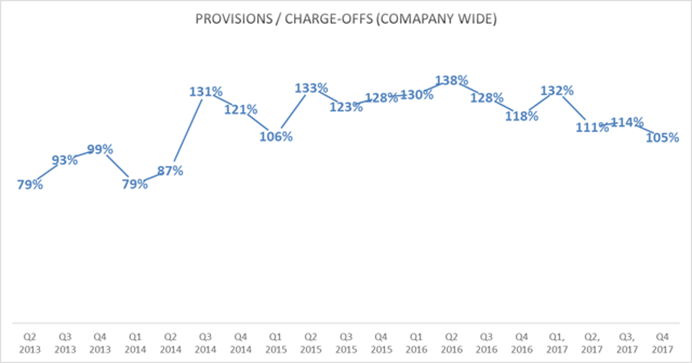 COF has seen tremendous growth in its credit card division relative to the industry.

However, COF’s growth slowed at the end of 2018. In fact, some of the growth above included $5.7B of credit card receivables that were purchased from Synovus Bank on September 25, 2017. The complicated transaction in which COF tried to buy Cabela’s, an American direct marketer and specialty retailer of hunting products, only to have the Federal Reserve reject the transaction. Not to be denied, COF came up with a creative solution in which, Synovus Bank, bought the banking assets of Cabelas and then sold the credit card loans to COF. Synovus kept the deposits from Cabela’s and received a $75M fee. Excluding the Cabela transaction, COF, which had typically seen above average trends in terms of growth dipped below the industry in 2017 in terms of credit card loan growth. Fairbank had continually discussed a growth window in 2015 & 2016 and COF elevated its marketing expense substantially. But marketing expense declined to $1.67B in 2017 compared to $1.811B in 2016. The company expects marketing expense to increase in 2018.

The company expects charge-offs to moderate in 2018 as growth math slows. COF's loan growth dipped below industry growth for the entire 2017, it is expected this trend continues—loan growth has been modeled in its credit card division to be half of the of the industry.

Industry revenue grew by 4.1% in 2017, according to IBISworld.com (Credit Card Issuing in the US) or 57% of loan growth.

2012 was used as the starting year for the charge-off calculation as, in this year, COF purchased approximately $28 billion of credit card loans from HSBC. Loans Credit card loans. COF ended 2012 with $92 billion compared to $65 billion the year earlier—today credit card loans today are $115B. 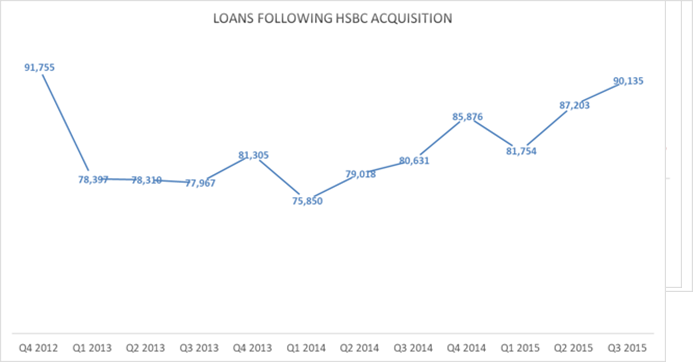 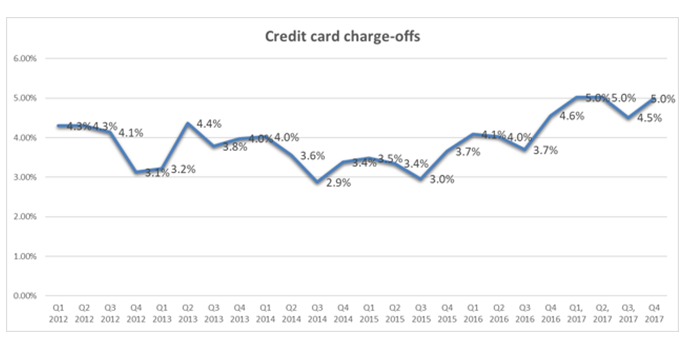 COF pulled back on growth following the transaction. As the company shrunk its book, it retained its most credit worthy customers. In Q3 2014 and 2015 the company had credit card-charge-offs of around 2.9%. The average charge-offs for its credit card division is 3.93% since Q1 of 2012. 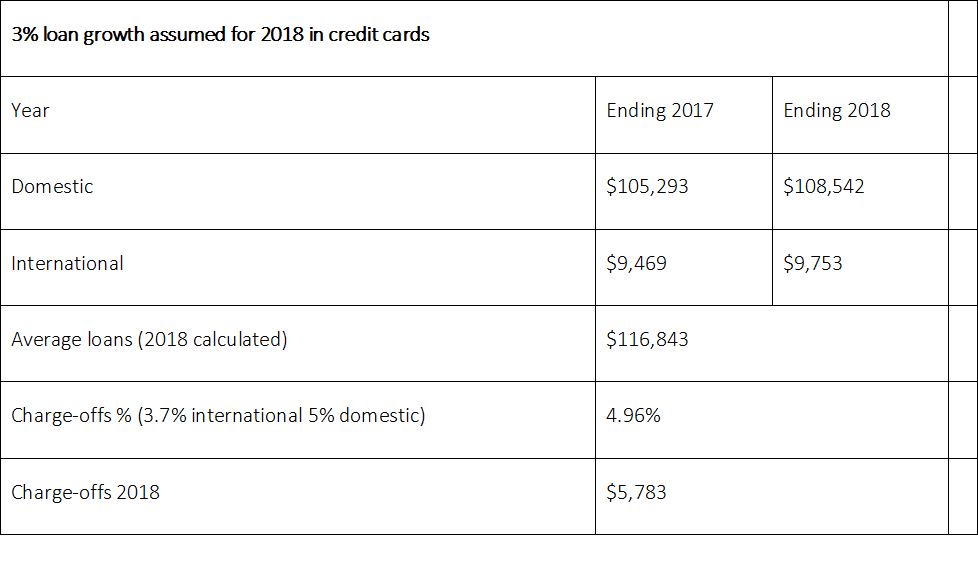 2018 will still be a mostly forward book business as growth math slows down. The company expects charge-off rates to stay around 5% in 2018. This would imply $5,783 of credit-card charge-offs in 2018. However, as the book matures, a downward pressure on the charge-off rate would be expected a downward rate put on charge-offs. An example is provided below.

For simplicity, it is assumed that the company has linear loan growth throughout 2018. 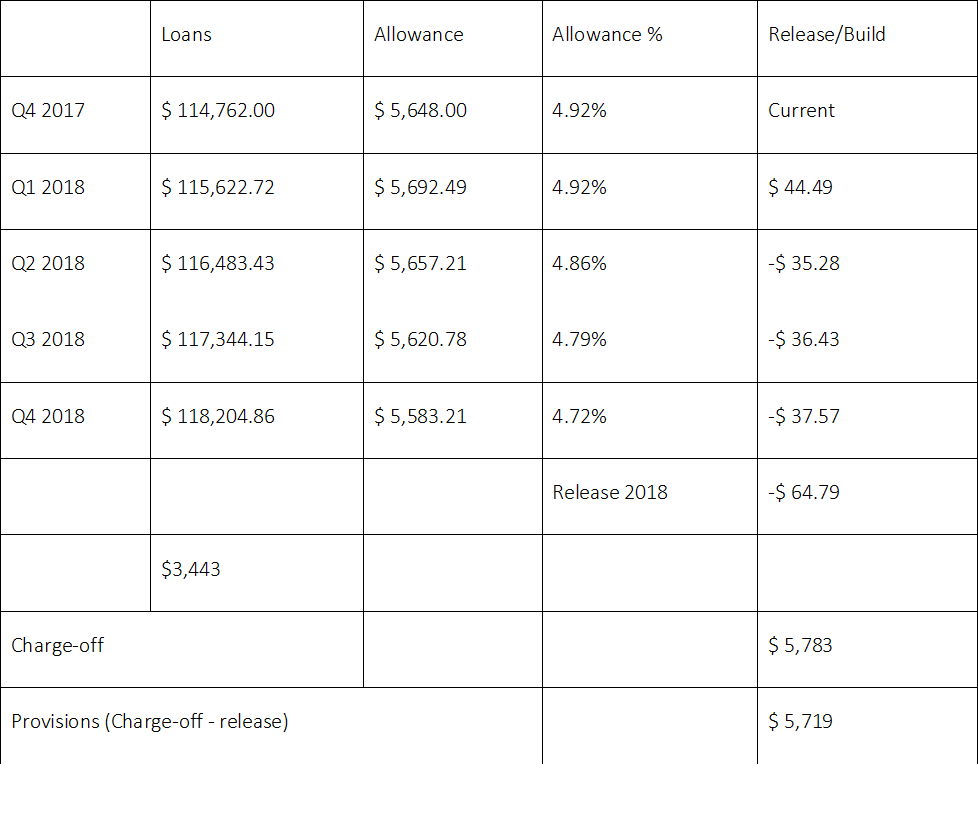 Since the book of business should have a charge-off rate of 4.72% at the end of 2018, it is expected the company has a small allowance release in 2017. 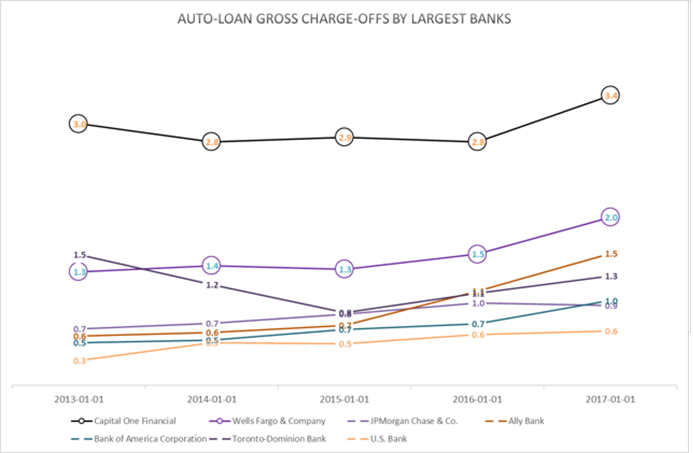 (Source: Constructed through data from Bank Reg — please note that if a loan isn’t through an FDIC registered bank then the loan isn’t included on Bank Reg data—therefore the auto industry is substantially larger than what is owned by the banks since many non- banks hold auto loans. Information is processed by Bank Reg Data from FFIEC Examination Council)

According to Bankreg, which just extrapolates FDIC reports, Capital One Financial is the largest issuer of auto-loans, but Allly Financial holds some of its auto assets outside its FDIC insured bank. For instance, Allly had FDIC banking assets of $137.4 billion in Q4 of 2017 but had $167B of total assets. Ally has $68 billion of consumer auto loans, $37 billion of commercial and another $9 billion of operating leases. Wells Fargo pulled substantially back in its auto loan division in 2017, reducing loans by around $10 billion.

In its 2017 10-K COF said it expects growth to moderate in the auto, but Fairbank said in the 2017 Q4 conference call that “I think the growth opportunity is still pretty good in the auto business. COF is expecting charge-offs to increase in its auto loan business going forward.

Industry loans grew 5.5% in 2017. It is estimated that COF will grow its originations by 8% next year compared to the prior year and be only a little above industry growth, this will translate into $29.3B of originations compared to $27.7 B last year. On average the company has seen around 46.3% of its beginning loans paid back by the end of the year (calculation shown below) 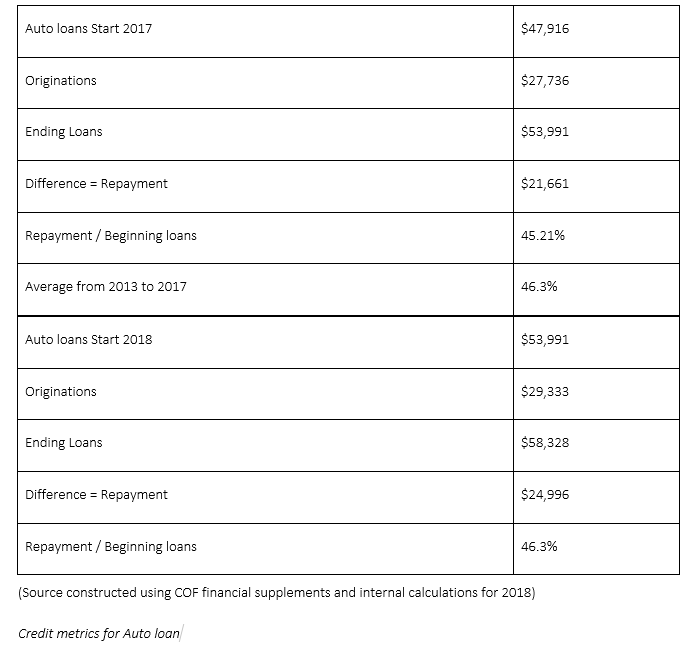 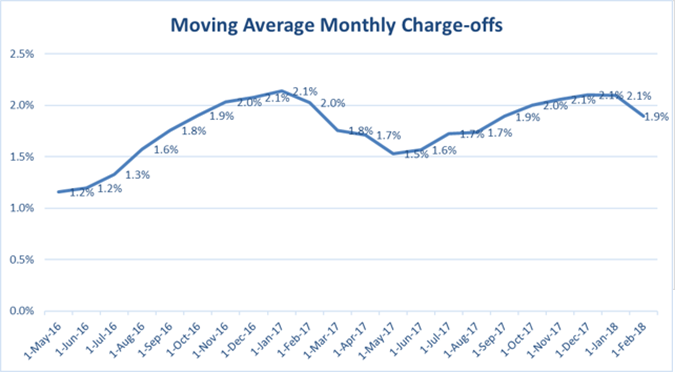 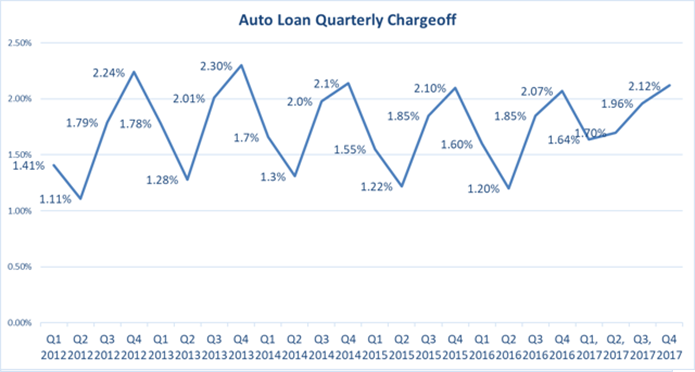 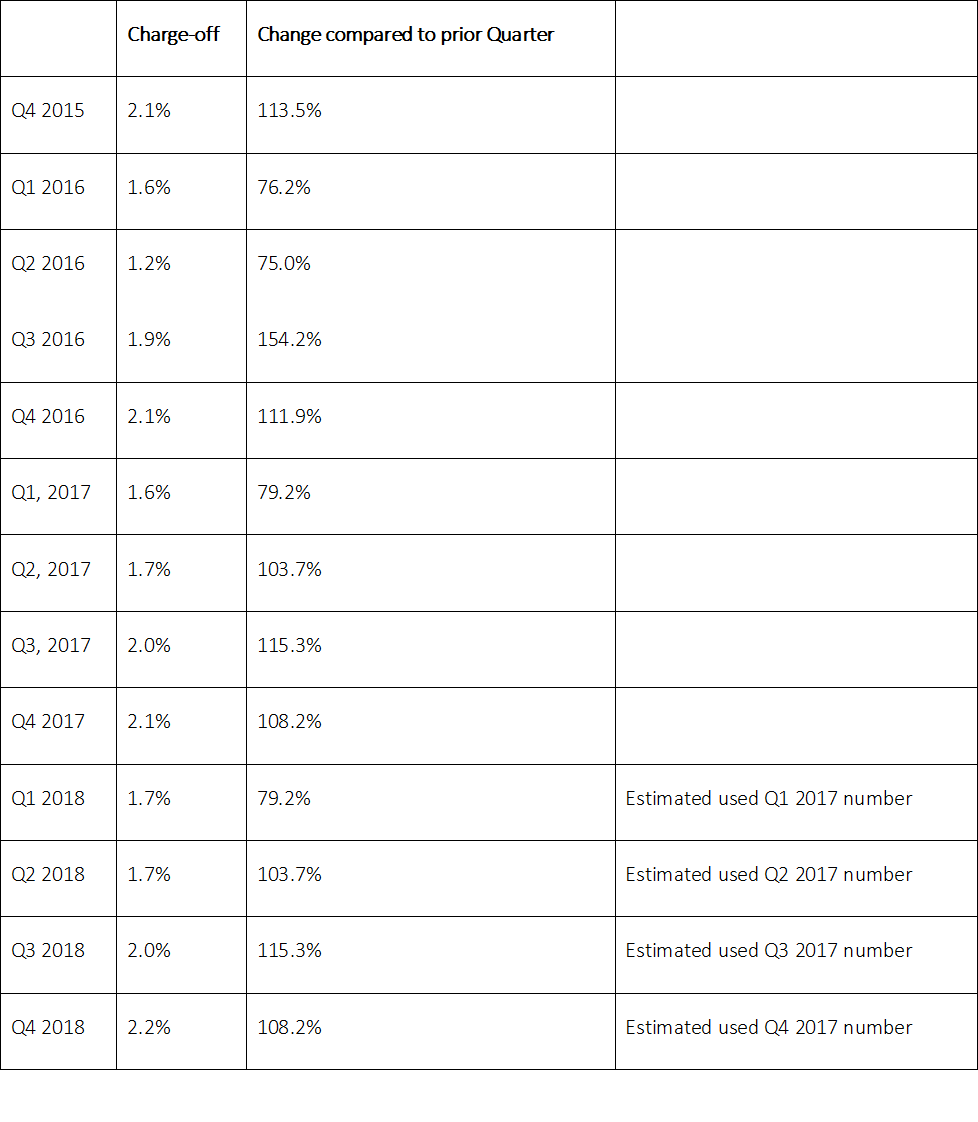 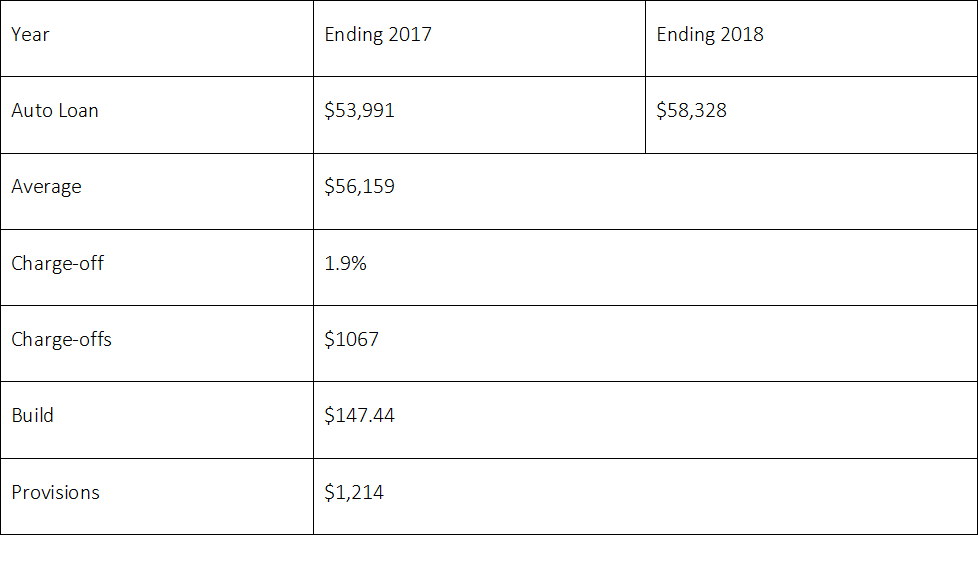 The rest of the consumer loan division has been decreasing in a linear fashion since Q1, 2012. 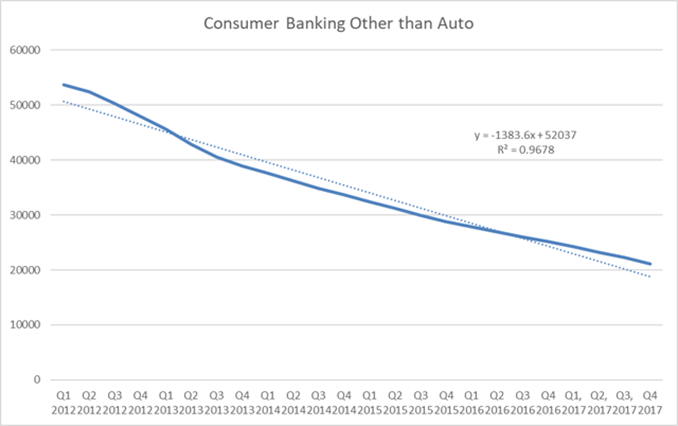 This relationship produces ending loans of $15.5 B

Last year provisions were $61M, for simplicity, the number for 2018 is expected to match this number.

COF is not expecting much growth, if any, in its commercial side because of competition caused from non-bank lenders. The company had substantially elevated provision expense in the last several quarters due to high taxi medallion loan losses. Even though the taxi medallion portfolio only made up $390 M of loans in Q3, the company recorded a provision expense of $115M related to this individual portfolio in Q4 2017. The company should see further releases as $2.5B of loans are in the Oil & Gas industry, and the price of oil has increased substantially in Q1 2018. 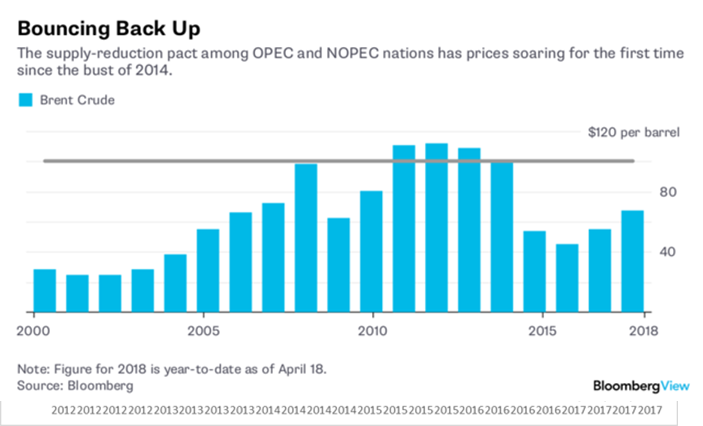 The company had 1.13% for an allowance against these loans at the end of 2017. This number is too high given the historically low charge-off rates. The last 12 quarter average charge-off is .57%. Furthermore, the increase from the .45% charge-offs in 2016 to .69% in 2017 was essentially all related to the taxi portfolio, which is now gone. If the company pares back its allowance to .9% then losses would be the following. 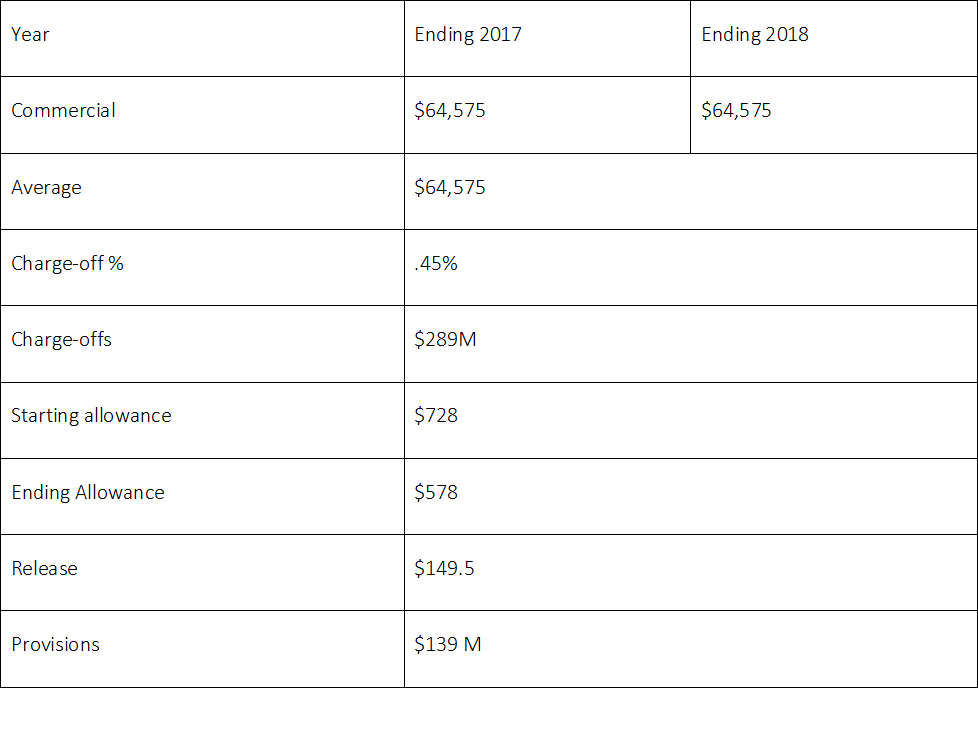 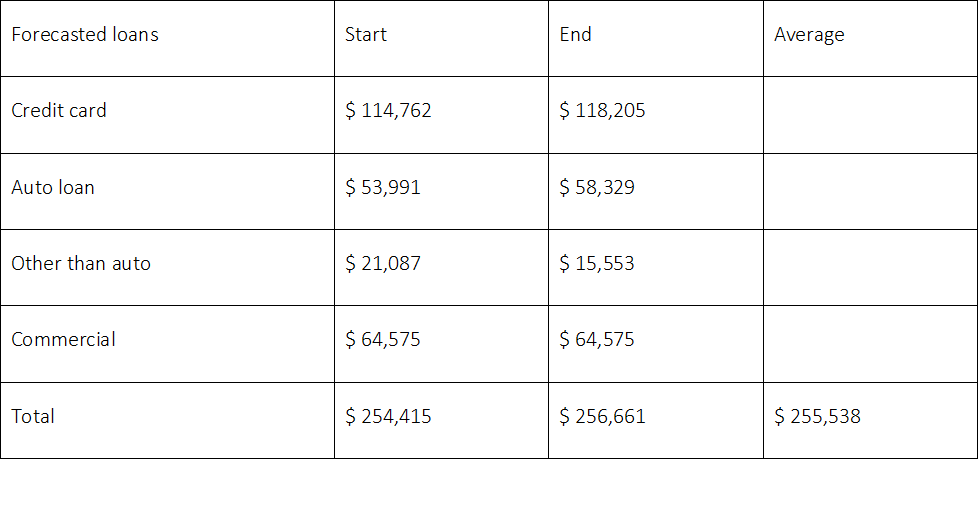 The company’s adjusted efficiency ratio was 51.02% in 2017. The company expects to see modest efficiency gains in 2017. COF includes amortization expense in its efficiency ratio however this expense does not affect earnings power. The depreciation of intangibles is similar to how goodwill used to be depreciated in the early 2000’s. Most intangibles are not losing value year to year. For instance, COF had $2.1B of book value purchased credit card relationships (PCCR) and a net book value left of $436 M. There is no indication from the company is losing these relationships in a linear fashion. If anything, the company has enhanced its relationship with these customers and could write up the value. However, accounting convention says you can write down intangible assets but never write them up. Clearly these rules make no sense. Accounting should reflect the substance of a company and by allowing write-downs but not writeups the charge just becomes a wrong number. Furthermore, as mentioned, it would be better if this was never capitalized in the first place. 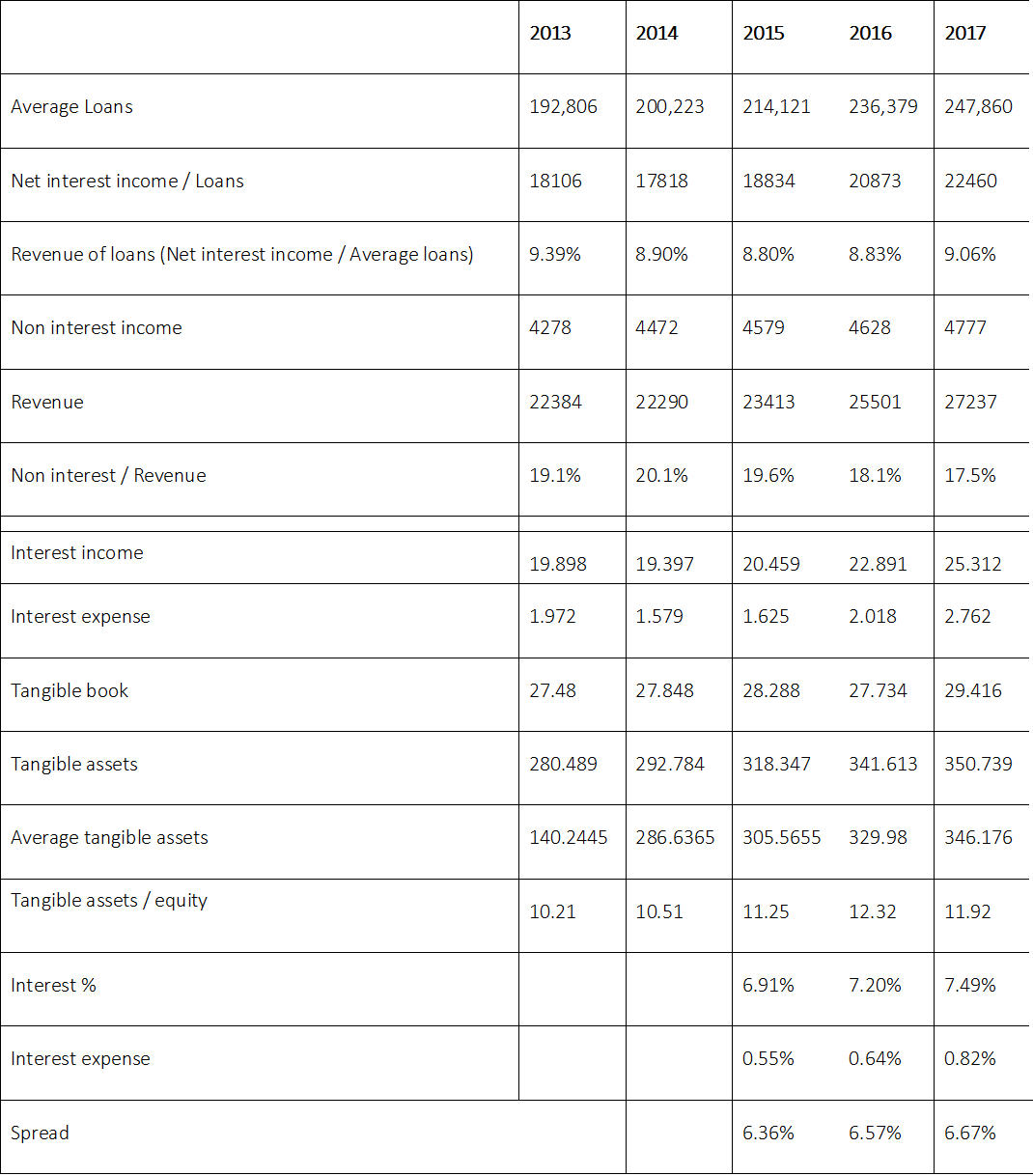 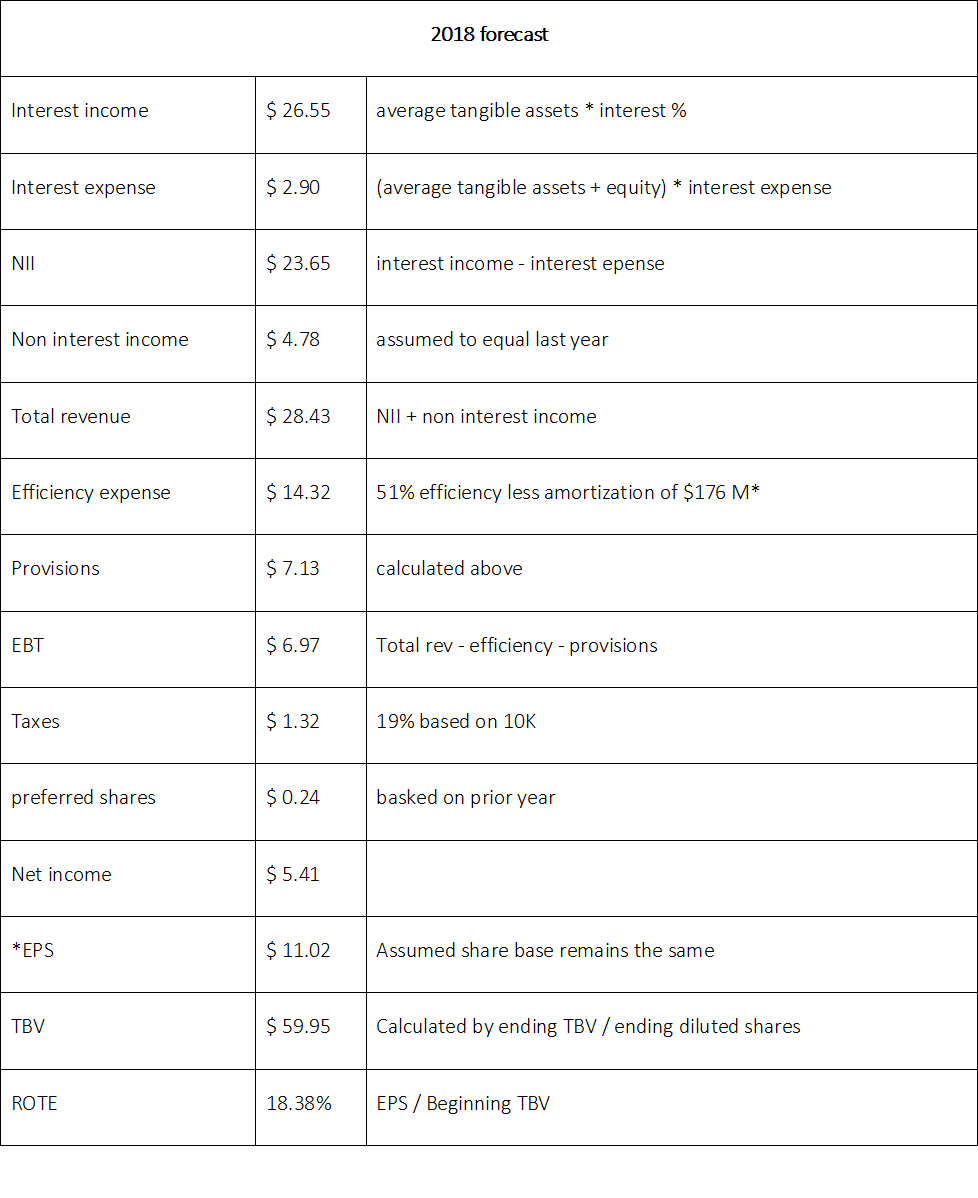 Given its expected strong EPS expansion COF appears to be substantially undervalued. 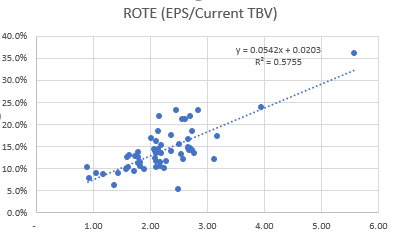 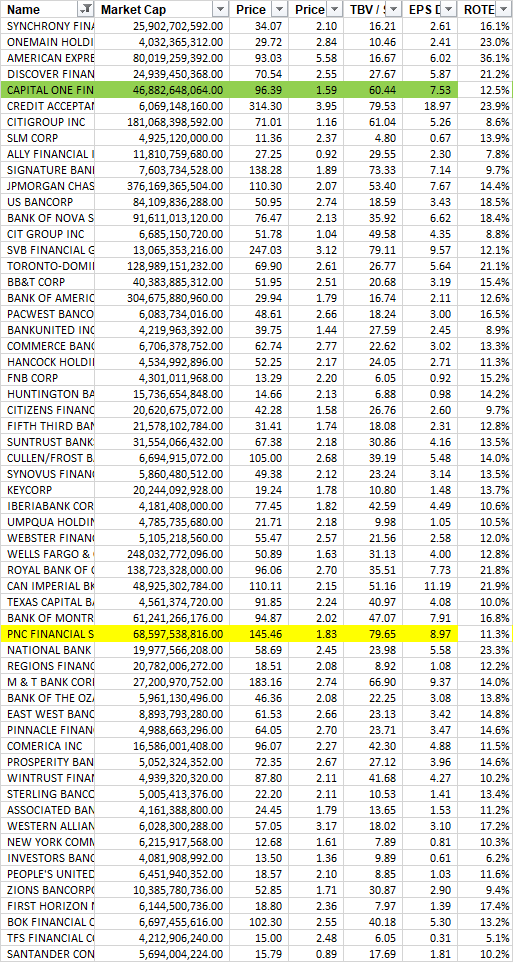 Plugging Y of 18.3% and solving for X for COF into the formula we would get an expected price to tangible book value for COF of 3, implying a price of approximately $180--therefore investors should expect substantial upside.

Please check with your financial advisor before making any investment decisions. Disclaimer: Do not base any investment decision upon any materials found in our stock reports. We are not registered as a securities broker-dealer or an investment adviser either with the U.S. Securities and Exchange Commission (the "SEC") or with any state securities regulatory authority. We are neither licensed nor qualified to provide investment advice. The information contained in our report is not an offer to buy or sell securities. We distribute this information exclusively to individuals who wish to receive it.