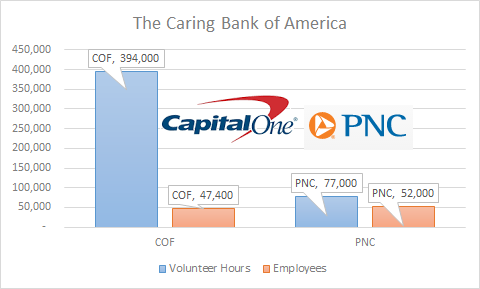 Oddly, two U.S. Banks mentioned how charitable its employees have been over the year; it was Capital One Financial ranked as the 9th largest bank in America vs. PNC ranked as the 8th largest. The federal reserve breaks COF into two separate banks because of separate registrations, but both banks are ranked in at least the top 10 before the addition of the 2 subsidiaries.

Notably, each bank had its volunteer off and COF pushed far ahead. According to COF, it's employees spent 394,000 hours in volunteer service, working in thousands of community and charitable programs across the world. Unfortunately for PNC they lagged far behind at only 77,000 hours. This means each COF employee spent around 6 hours of time volunteering compared to less than 2 for PNC. Despite not looking as magnanimous in comparison, PNC still dedicated the bottom of page 7 of its annual report to its charitable foundations.

Both banks couldn't be reached for comment with regards to the calculation of their volunteer hours. Most other banks did not release its their volunteer hours for the year. While volunteer hours are just one metric, it is reassuring to see company's employees giving back to the community without costing shareholders money. Milton Friedman, one of the most noted economists of the 20th and 21st century, believed that the free market could take care of charity. He believed the following:

Philanthropy in its essence is voluntary, and Friedman saw charitable activity as the ally of voluntary exchange in the economy. But he argued: "the social responsibility of business is to increase its profits. The corporate executive is an employee of the owners of the business, its stockholders...management does not have the right to spend owners’ money for any purpose other than to advance the interests of the business."

Milton Friedman would approve of the efforts of Capital One & most of the efforts of PNC as they have managed to give back to the community, while keeping shareholders, the owners, in mind. However, contrary to Friedman PNC gave $72 million in charitable sponsorship. Friedman was not against charity giving, but he feared corporations would take a collective role in giving charity rather than allowing individuals to decide their charitable giving. He would have argued that paying this amount as dividends would have allowed the owners to properly allocate and choose their charitable givings -that's if they wanted to give to charity - evidence below suggests that individuals paying less taxes correlates to higher charitable giving - meaning more dividends could equal a higher amount of charity giving.

The U.S., positively, ranked number 1 by the world giving index in charitable contributions per-capita building a case that the free market may do a better job than government in terms of giving citizens the sense of community and therefore giving to charity.