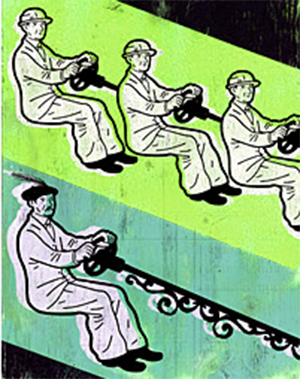 The same trend that toppled the integrated steel industry years ago is also seen in the world of technology today. However the technology environment is different than steel and the forces that work against steel companies may work in favor of technology firms. An integrated steel mill manages every part of the business of steel. From mining, to melting the iron from the ore, to turning it to steel and shaping the steel by rolling it. The steel companies used to rule the world and were juggernauts in their industries. Along came the modular mini mills – modular because they focused on just one or two segments of the steel making value chain, and did those very well. Mini mills used scrap metal, and thus eliminated the need to mine and extract iron from ore. The mini mills essentially wiped out the integrated steel firms, and commoditized the industry.

The same cycle occurs periodically within the technology sector. For example, Microsoft creates an operating system and owns the web browsers, word processors etc. But in comes Linux, Firefox, and Open Office and commoditizes the industry. Integrated companies control all or most aspects of the value chain, whereas modular companies focus on one or two parts of the value chain and cut costs. Another example is Apple’s iPhone. Apple controls the components, the design, the software, and the marketing of its product and is thus fully integrated. The modular approach led by Google’s OS, plugs into Samsung’s/LG’s/HTC’s hardware, and is marketed by Best Buy or other retail stores. Android has commoditized the market.

However tech is different than steel in that there are always new innovations and the industry changes much faster. While investors were touting a modular approach for Apple back when the company was struggling, Steve Jobs famously said that while these investors see Apple’s integrated approach as its greatest weakness, he sees it as Apple’s greatest strength. The trick to a long lasting integrated company, is to constantly innovate and to create an ecosystem by allowing your products to work together. Thus the strength of the integrated approach is maintained, while modular businesses take more time to catch up. If Apple adds a face scanner to its iPhone hardware, this gets integrated into its software, and perhaps interfaces with iTunes and other Apple devices as well, which provides an overall great experience. In order for the modular group to catch up, Samsung would need to change its hardware, but then Google would need to coordinate an operating system change to support the new hardware, and it would need to work with HTC hardware as well, and then they need to rely on many different retail channels to get the message out to customers in order to sell the new product. This ends up being a large mess, which makes it difficult for the modular players to innovate on more than just lower price. This puts Apple in command when it comes to innovation, and this is shining through and can be seen in Apple’s ecosystem as well as their seemingly incremental innovations. Google recently became of wholly owner of its Pixel unit and is bringing this in-house, as the company now sees the value of the integrated approach for its mobile strategy.

One Reason Elon Musk is worried about Artificial Intelligence